How to verify MD5 or SHA1 checksum of file on Windows Computer?

How to verify MD5 or SHA1 checksum of file on Windows Computer? 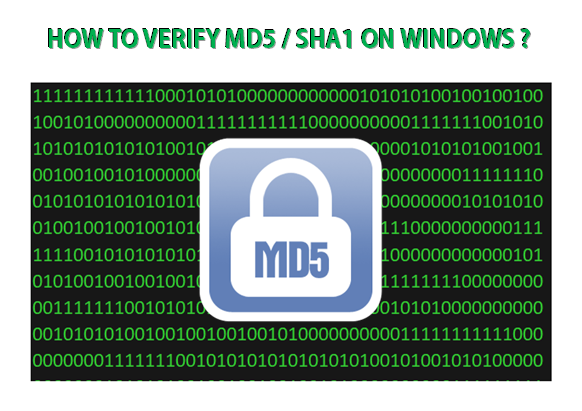 When we download files from the internet or copy from one source to another destination, the file may not be exactly the same as the source or in other words, the file may have being corrupted in transit. So there is a need to check the integrity of the file. That is where verification of hash is required. Let’s see “How to verify MD5 or SHA1 checksum on Windows Computer?”

What is MH5 hash?
MD5 algorithm is a widely used hash function. Although MD5 was initially designed to be used as a cryptographic hash function, it has been found to suffer from extensive vulnerabilities. However, it is still used as a checksum to verify data integrity, but only against unintentional corruption. MD5 outputs a 128-bit hash value, whereas, SHA1 generates a 160 bit hash value. So MD5 works faster but is considered to be less secure than SHA1.

How does it work?
Suppose a file is provided for download on a site. The publishers can generate an MD5 hash code for the file and also provide the MD5 hash code of the file.

A user who downloads the file can then verify the MD5 hash code and check if the code matches with the one published on the source. If they are same, all is good. If not, the file might have been corrupted.

How to verify MD5 or SHA1 checksum on Windows Computer?

For Windows computer, we can download “Microsoft File Checksum Integrity Verifier ” utility and use it to verify MD5 / SHA1 hash code of file.  “Microsoft File Checksum Integrity Verifier “is a command line Fciv is a
command line utility that computes and verifies hashes of files. It
computes a MD5 or SHA1 cryptographic hash of the content of the file. If
the file is modified, the hash is different

Steps to use the “Microsoft File Checksum Integrity Verifier” tool

Usage syntax and options (also provided in the readme.txt in the download).