In a recent post on this blog we already outlined how you can integrate Oracle Developer Cloud with Slack and receive messages on events that happen in the Oracle Developer Cloud in your channel. Having this integration will ensure that your DevOps teams are always aware of what is going on and have the ability to receive mobile updates on events and directly discuss them with other team members. Even though the integration with Slack is great it is only a part of the full DevOps chain you might deploy in the Oracle Public Cloud.

One of the other places you might want to have integration with Slack is the Oracle Compute Cloud Service. If we look at the below high level representation of a continues delivery flow in the Oracle Cloud we also see a “deployment automation” step. In this step new instance are created and a build can be deployed for unit testing, integration testing or production purposes.

In case you want to ensure your DevOps team is always aware of what is happening and you like to use Slack as one of the tools to enable your team to keep a tap on what is happening you should ensure integration with Slack in every step of the flow. This means, the creation of a new compute instance in the Oracle Compute Cloud should also report back to the Slack channel that the instance is created.

Creating a slack webHook
One of the things that you have to ensure if you want to have integration with Slack is that you have a slack webHook. A webHook is essentially an API endpoint where you can send your messages to and Slack will ensure that the message is promoted to the slack channel you are using as a DevOps team.

In the post where we described how to create a Slack webHook we already outlined how you can create a webHook that can be used. We will be using the same webHook in this example. 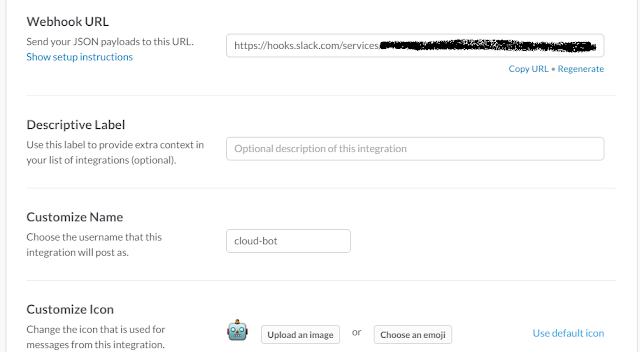 What is especially of importance when creating the integration between the Oracle Compute Cloud and slack is the part which is obfuscated in the above screenshot. This is the part of the webHook URL that is specific to your webHook and should look something like xxxxx/xxxxxx/xxxxxx . We refer to this as the slack_code in the scripting and the JSON payload when we start building our integration.


High Level Integrate
The main intend of this action is that we want to receive a message on Slack informing us when a new Oracle Linux compute instance has come online on the Oracle Compute Cloud Service. For this we will use a custom bash script. In this example we host the script in my personal github repository, however, in a real-life situation you most likely want to place this on a private location which you control and where you will not be depending on the github repository of someone else.

What in effect will happen is that we provide the creation process of a new instance with a set of user attributes in the JSON payload which is used for the orchestration process of creating a new instance. This part of the payload will be interpreted by the opc-init package which is shipped with all the standard Oracle images that are part of the Oracle Compute Cloud Service.

We will use some custom attributes to provide the script with the slack_code and the channel_name. We will also use the Prebootstrap attributes to state the location of the script that will communicate with slack as soon as the new instance is online.

When you create a new instance on the Oracle Compute Cloud you have the option to provide custom attributes to the creation process. The information provided needs to be in a JSON format and will be included in the overall orchestration JSON files. This is what we will use as the way to ensure the integration between the creation process of the new instance and slack. 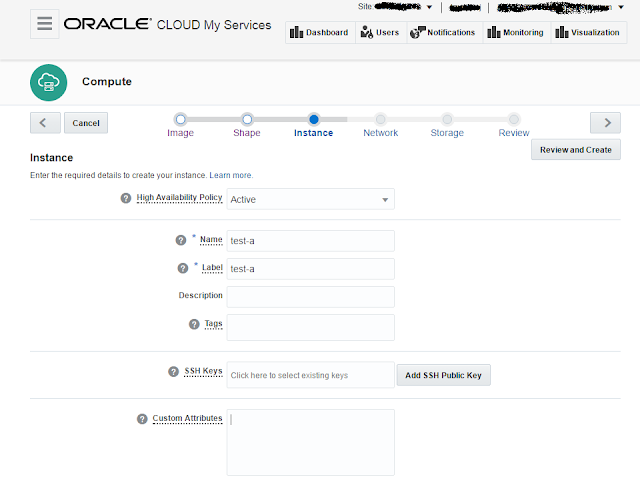 What we will provide to the “custome attributes”field is the following JSON payload;

As you can see we have a slack_code and a slack_channel. The slack_code will be used to place the code we got when we created the webHook on slack and the slack_channel will represent the channel in which we want to post the message.

The pre-bootstrap part holds the scriptUrl which tells opc-init on Oracle Linux where it needs to download the script which will be executed. The failonerror is currently set to true however in most cases you do want to have this on false.

If we start the instance creation with this additional JSON payload the script will be executed as soon as the opc-init downloads it during the boot procedure of the new Oracle Linux instance on the Oracle Compute Cloud. The script will take the input provided in the customer attributes by doing a call to the internal Oracle Cloud REST API. Next to this some additional information about the instance is collected by calling the meta-data REST API in the Oracle cloud.

This is effect will make sure that a message is posted to the slack channel you defined in the custom attributes. If we review the message we receive on slack we should see something like the example message below: 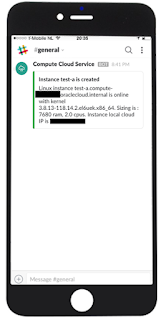 The bash scripting part
As already stated, the central part of this integration is based upon bash scripting currently hosted on github. In a real-world situation you would like to ensure you place this on a private server. However, it can very well be used for testing the solution. The bash script is available and released as open-source.

Additionally it will retrieve meta-data about the instance from the internal REST-API for meta-data in the Oracle Compute Cloud. The combined information will be used to craft the message and send it to your slack channel. The code below is a version of the script which can be found in this location at github. Do note, the below version is not maintained and the latest version is only available on github.

In conclusion
The above example showcases another point of integration between the Oracle Cloud and Slack. As DevOps teams more and more start to adopt interactive ways to communicate with each other it is a good practice to support them in this. Most likely your DevOps teams are already using WhatsApp, Slack or other tools to communicate.

Helping them and giving them the options to also include automated messaging will support the overall goal and makes them more productive and life more fun.