First I knew about this newly set up night market was from a cab driver and my girl friend wanted to go to Patpong but the rest of us were like “Hey boring…”. Then the cab driver overheard us so introduced this Asiatique to us.
Asiatique is the largest lifestyle outdoor shopping mall in Bangkok by Chao Phraya river which opened on May 2012. Barely 2 years, it is now the most upscale riverside night market and may be the trendiest landmark in Bangkok. #ISayOne

So this is my second trip to Asiatique and this time I chose to take water transport instead. 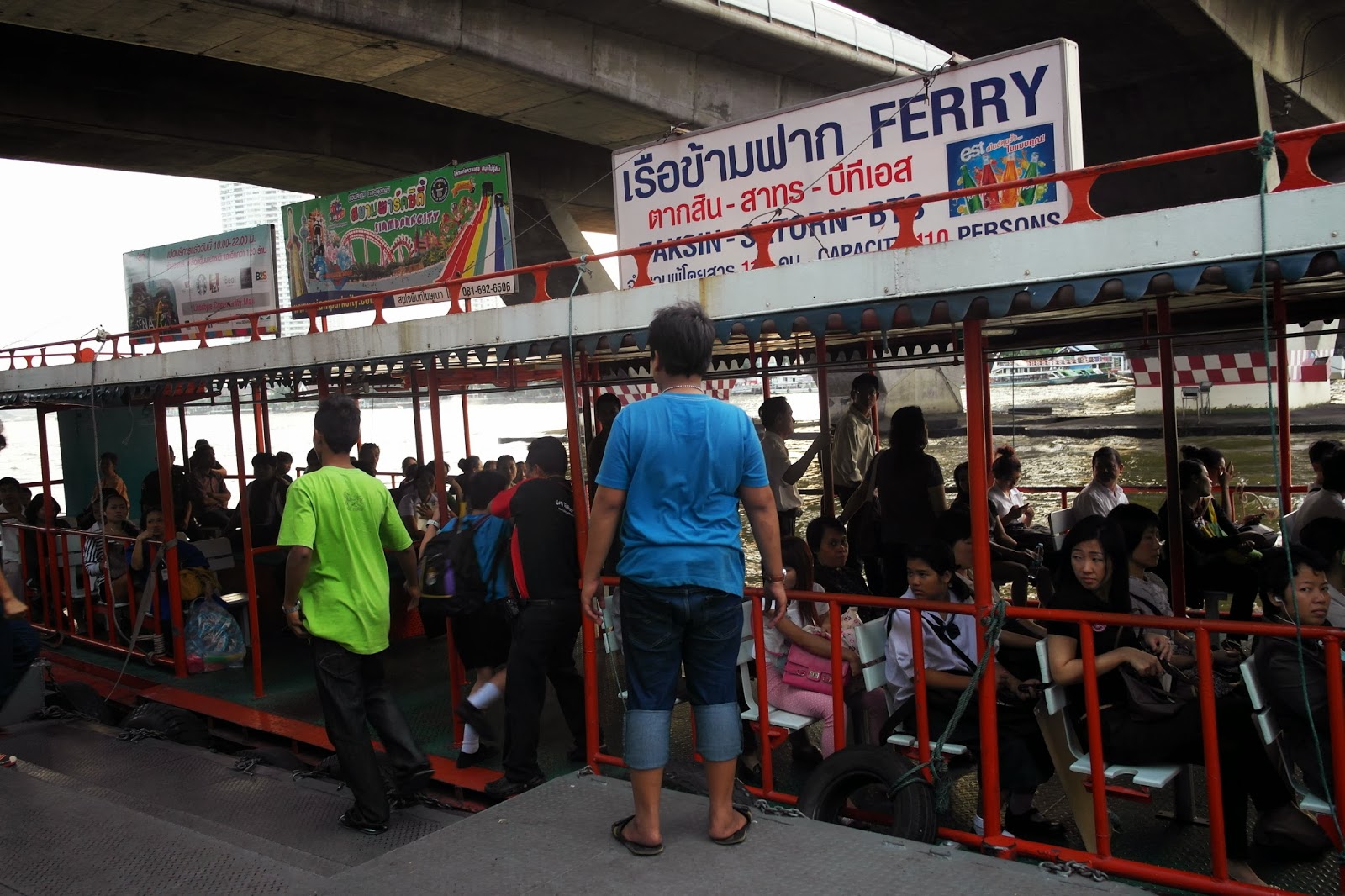 We took BTS to Saphan Taksin station and walked towards the pier from exit 2. There was a free shuttle boat from the pier to Asiatique but we blur blur walked to the first boat service and were quoted 100baht per pax. So please don’t be like us and be a big carrot and chop by them. Walk till the end of the pier and hop on the free shuttle boat. 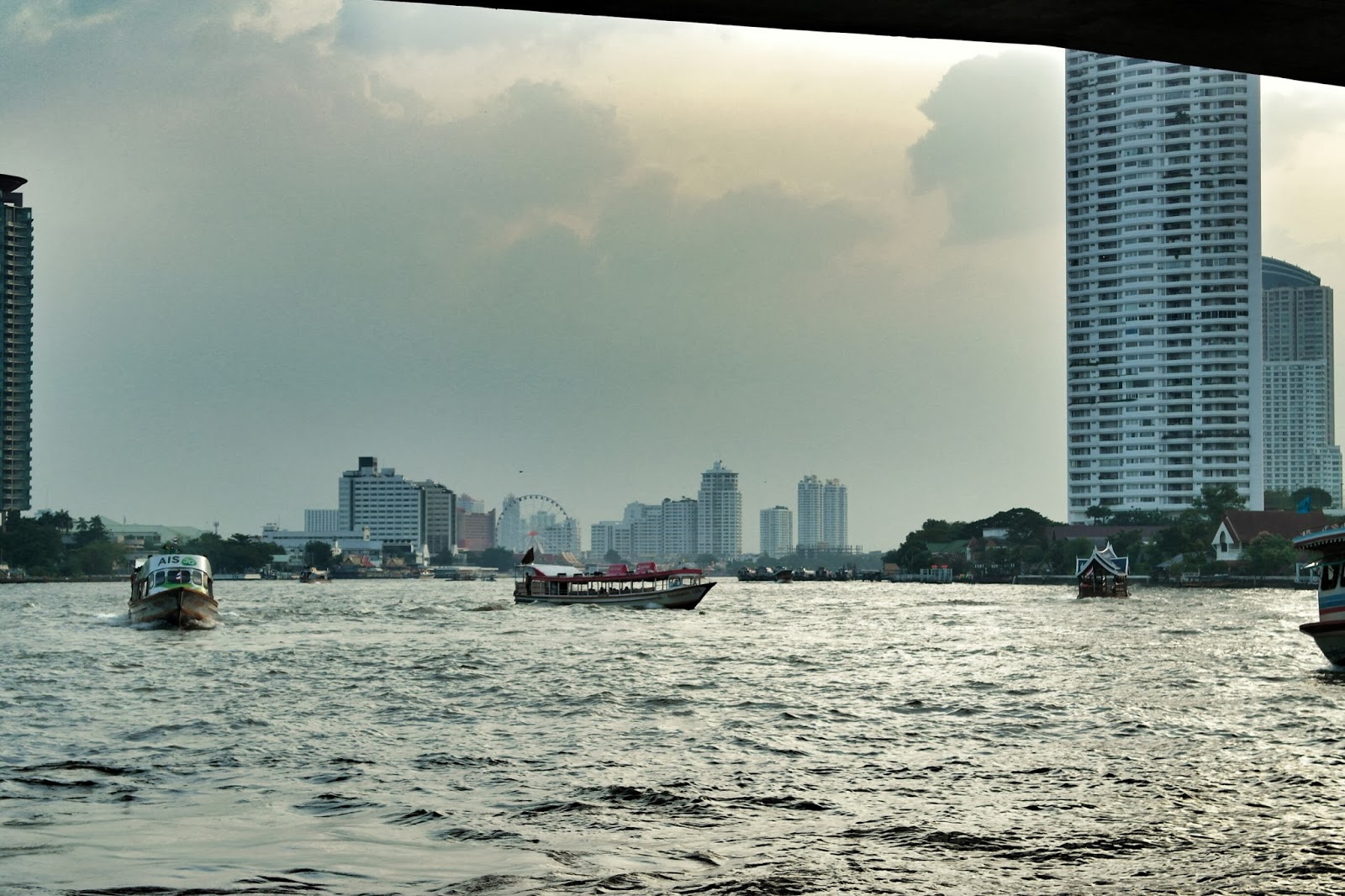 There! Do you see a ferris wheel? That is the place we are heading to. 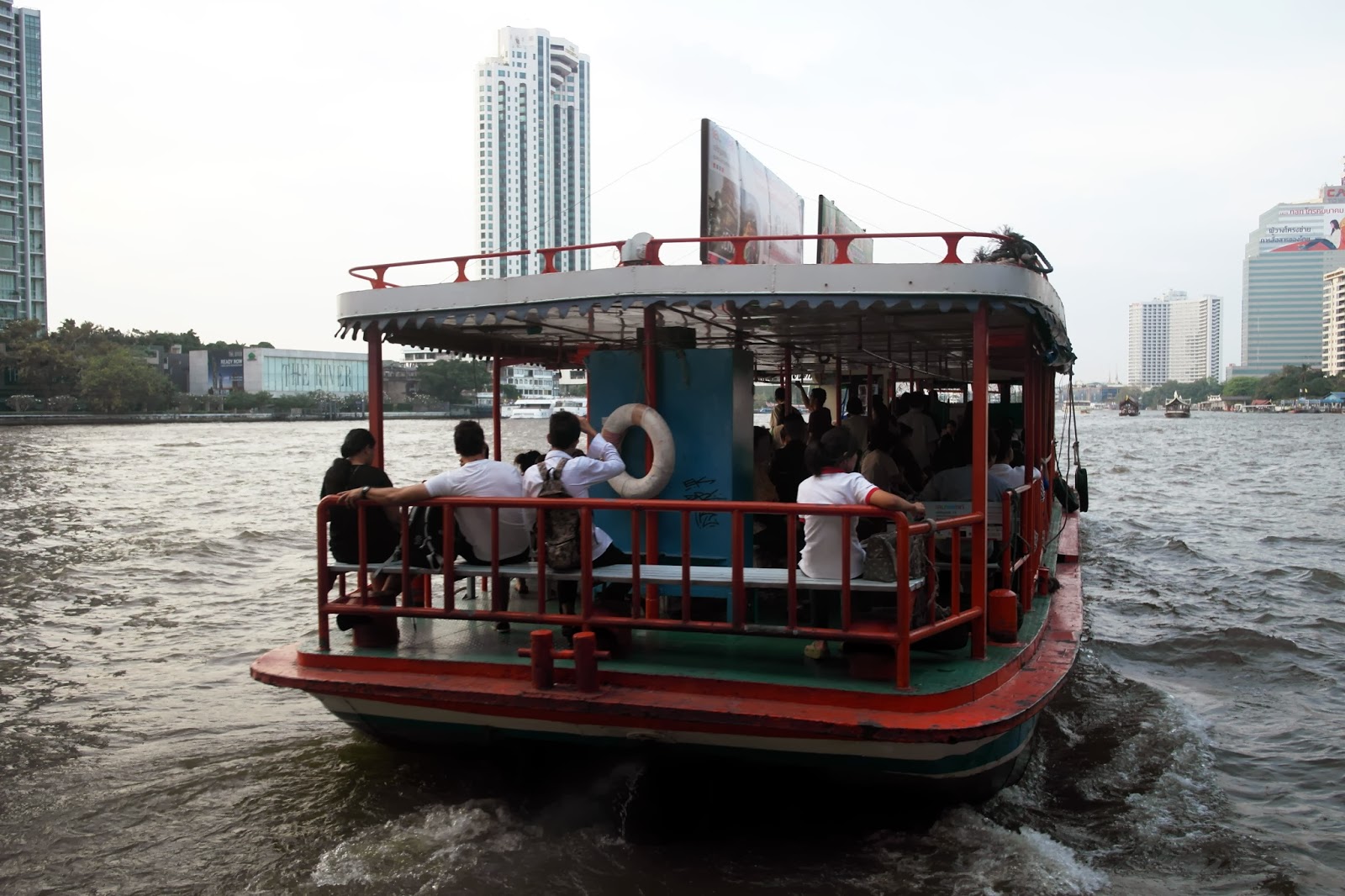 After we made our payment, so we thought maybe our boat would look like the above… But nooooooo….. the guy asked us to hop onto a super wobbly and looked like a bigger version of cannot-withstand-wind-and-rain-sampan ~.~ really cheat my money and my feelings….

Even though the ride took only 10minutes but all the passengers put on safety jackets and I was holding tightly on to my bf all the time. Woah it was a horrible nightmare! The whole time I was thinking “what if it capsizes?” “I cant swim” “omg I’m gonna die in bkk”… 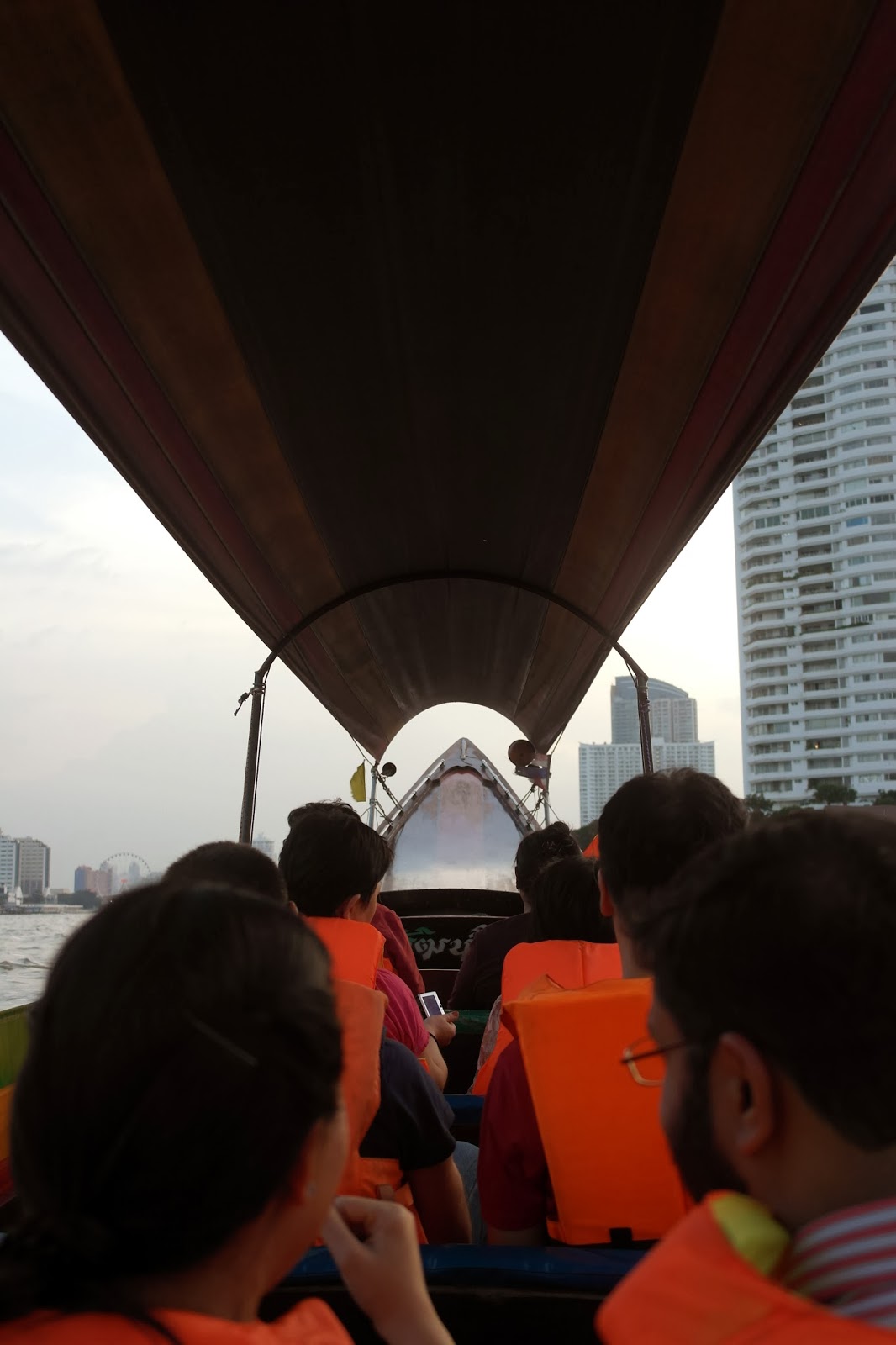 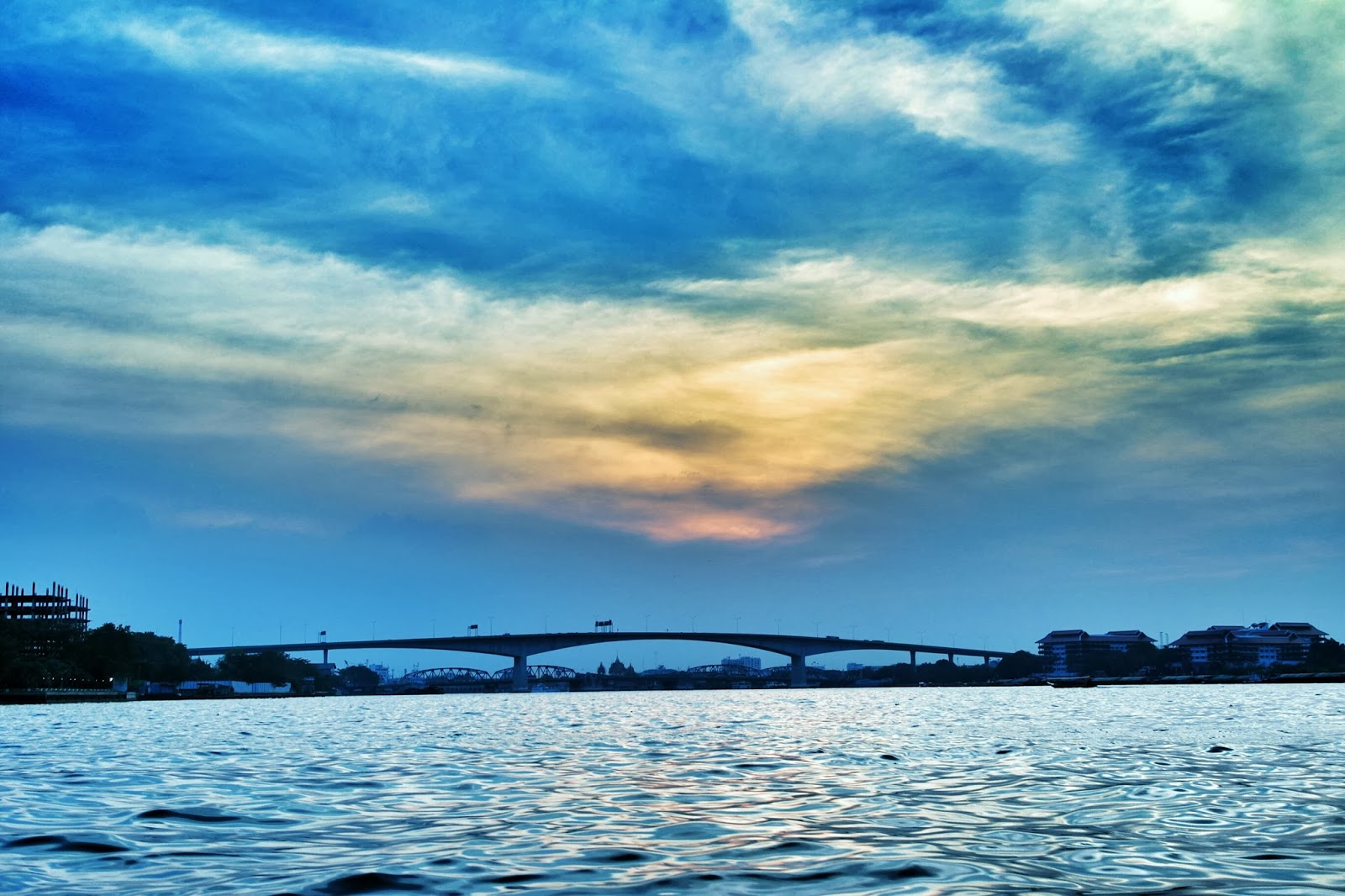 Okay lah, I still managed to take a nice scenary picture. *luckily my camera did not drop into the water* 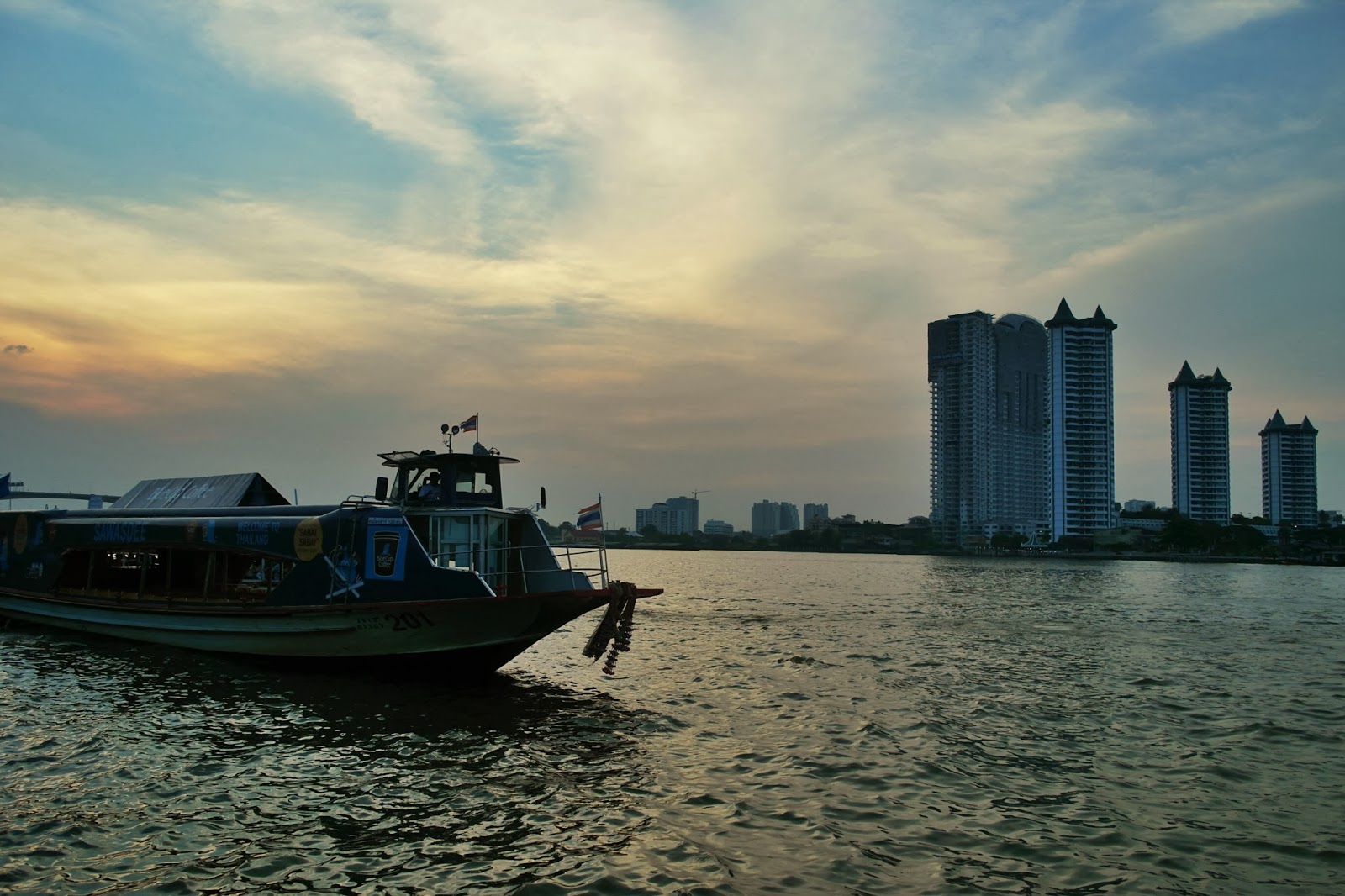 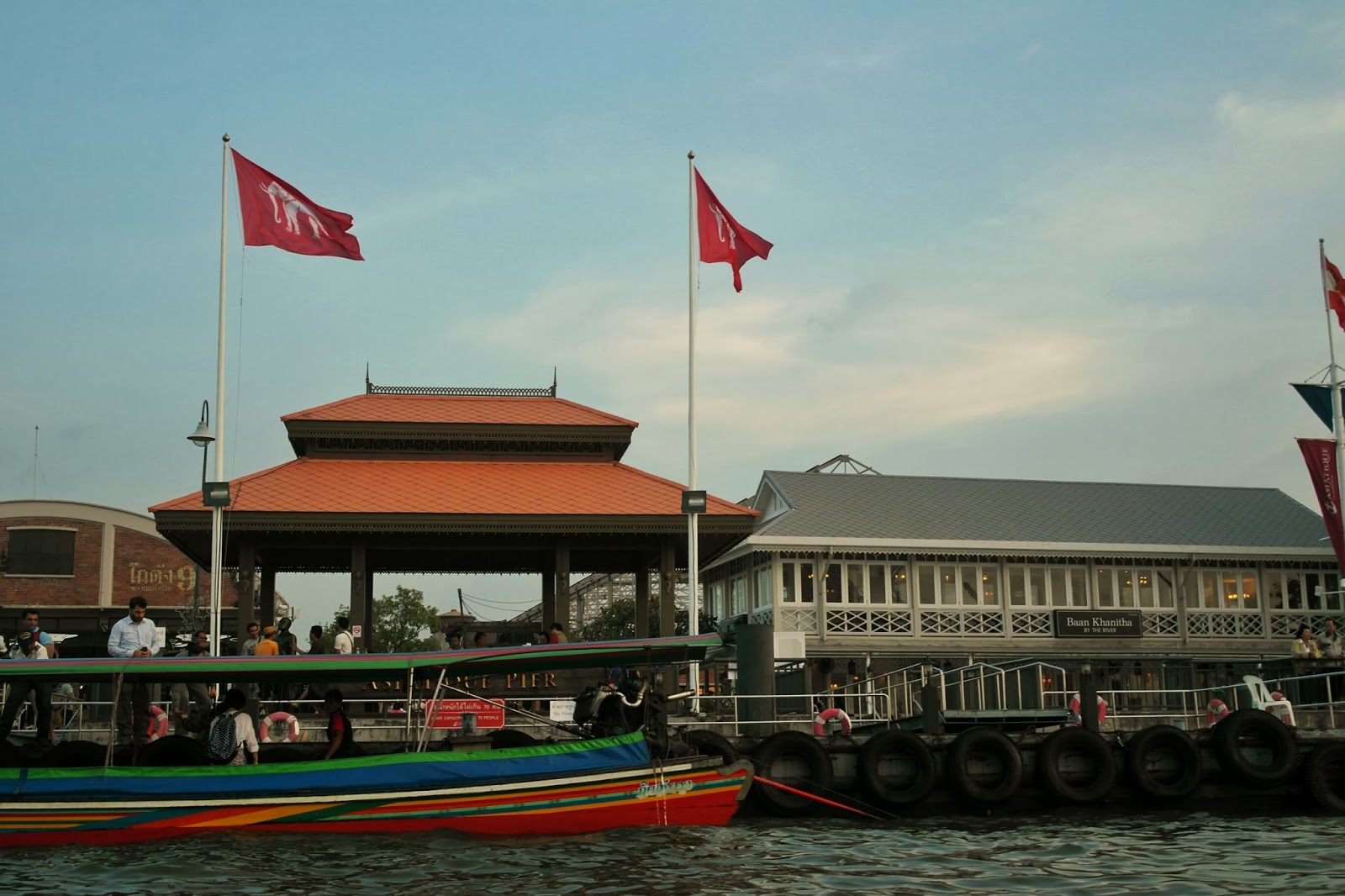 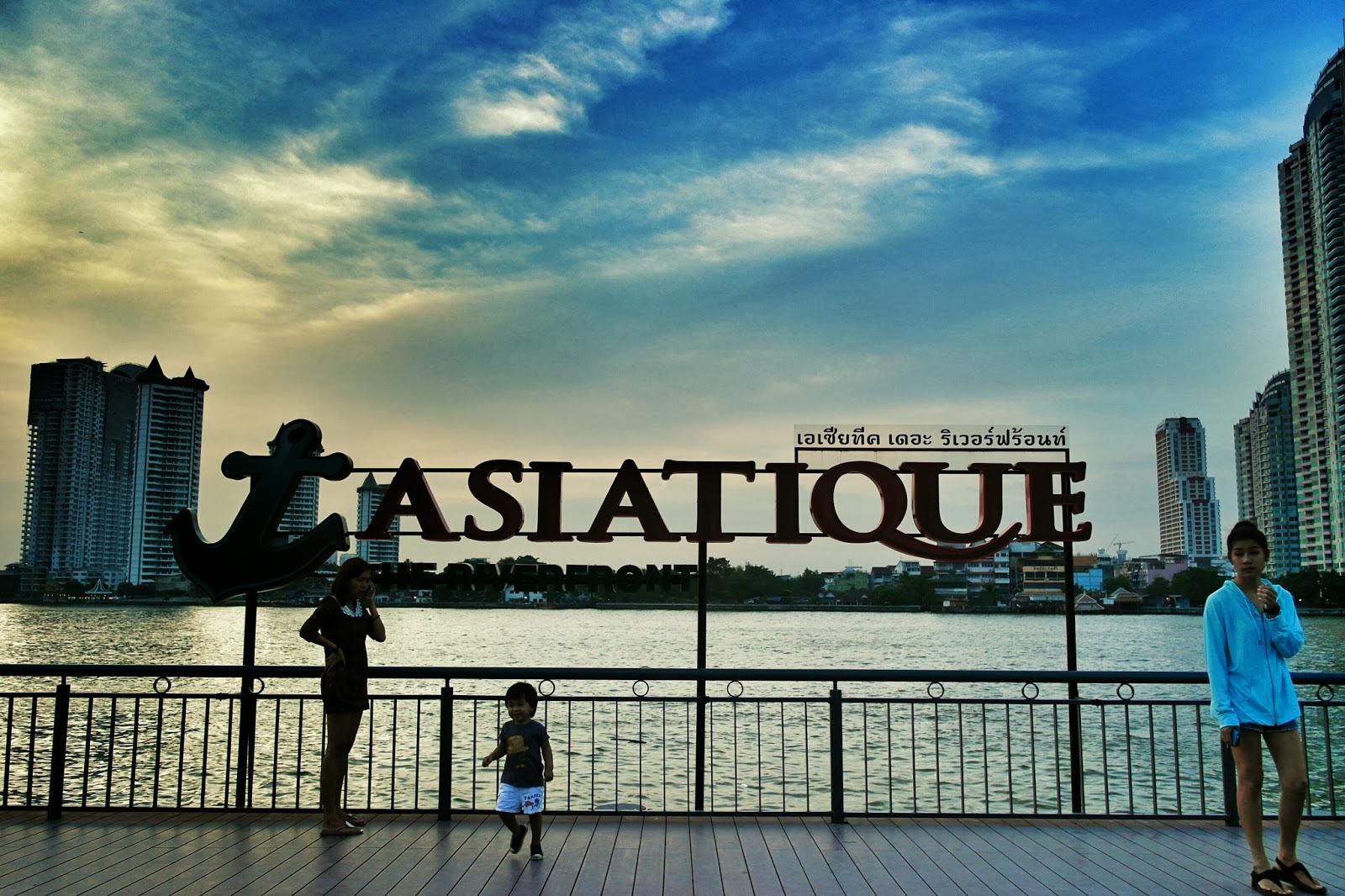 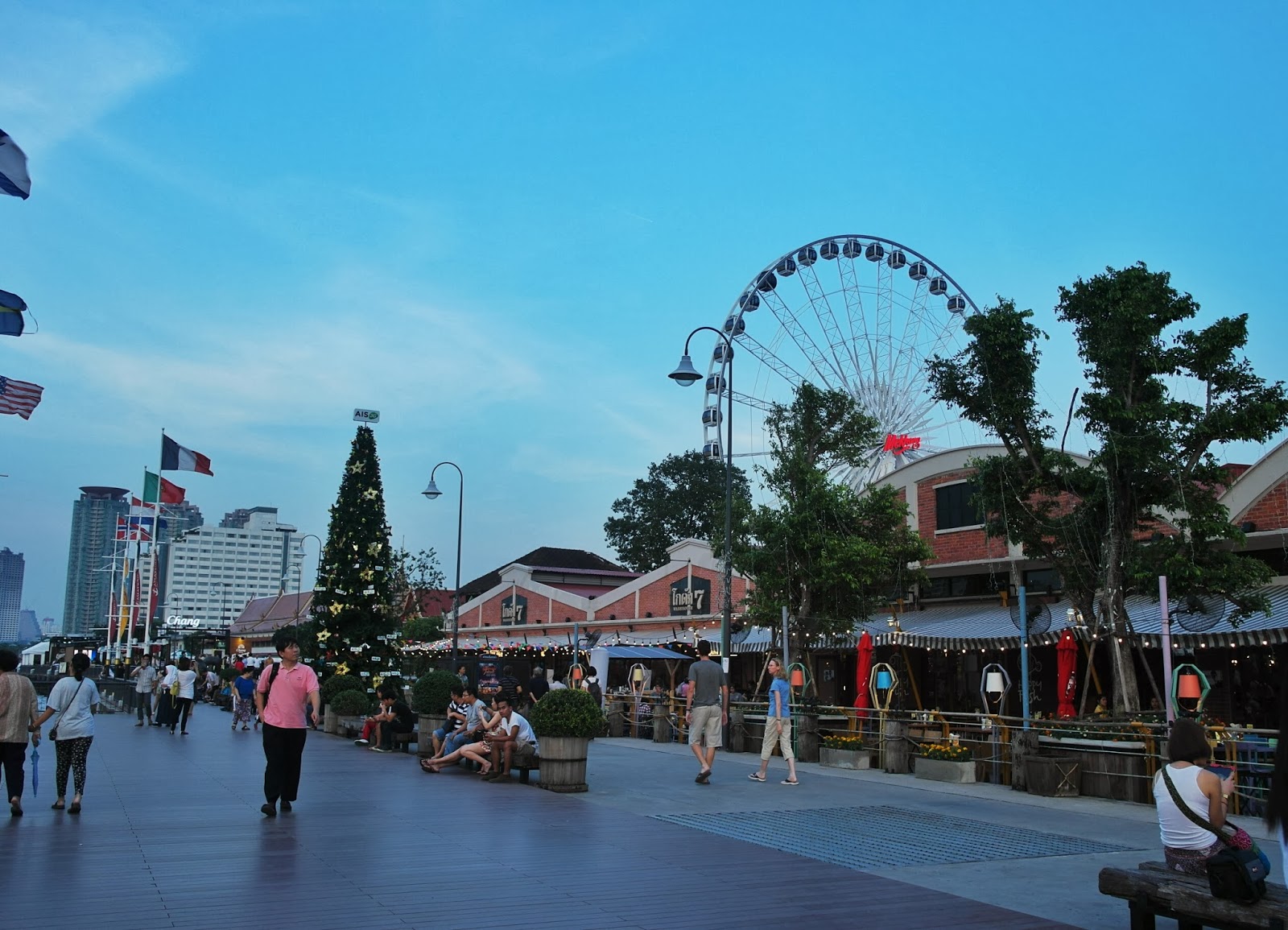 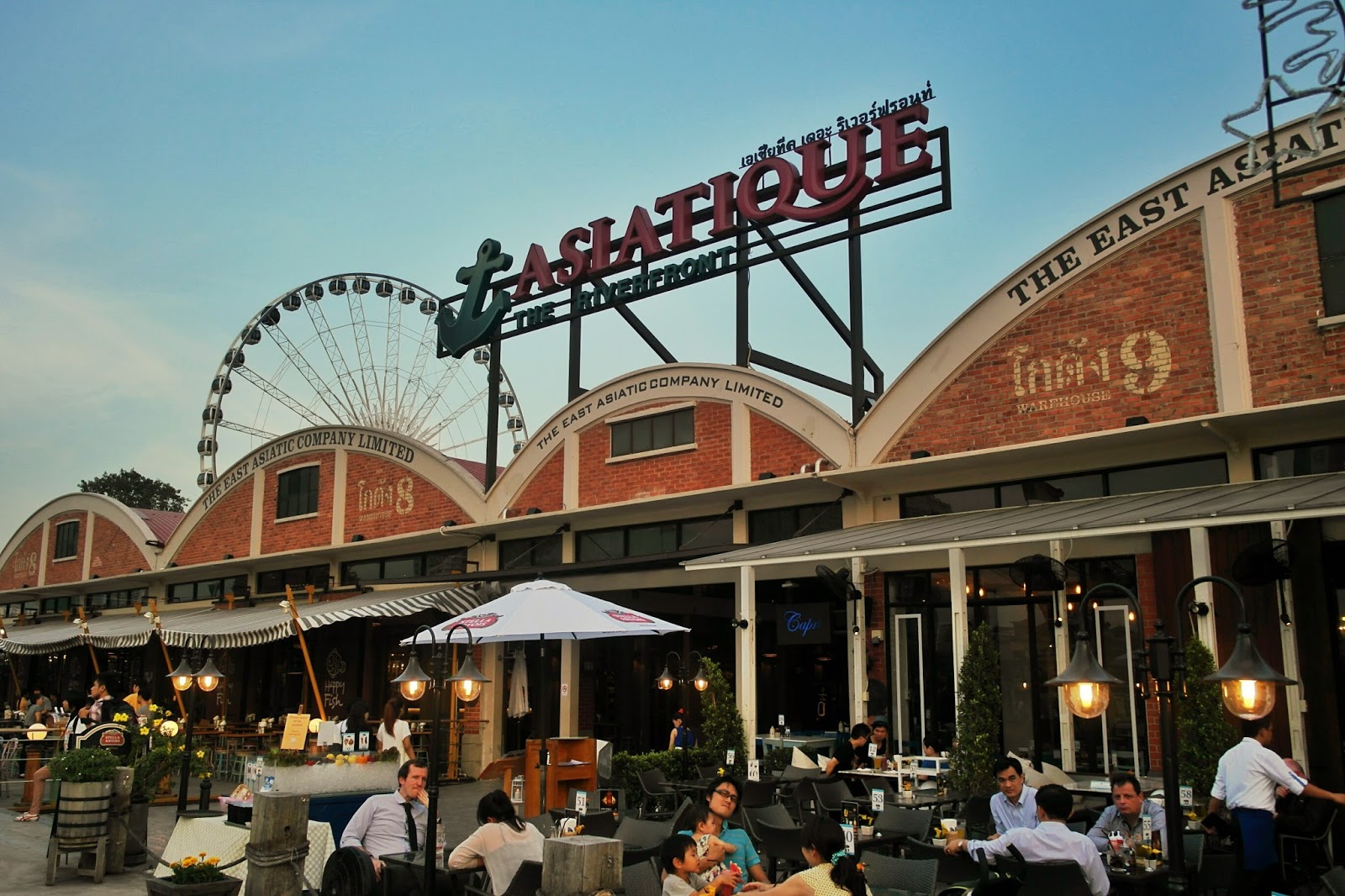 It is used to be an international trading pier owned by Danish trading company and many of their original buildings are still retained and turned into shopping district after renovation. That is why there are so many warehouse-like buildings. What a creative and cheap way to turn into a shopping paradise! 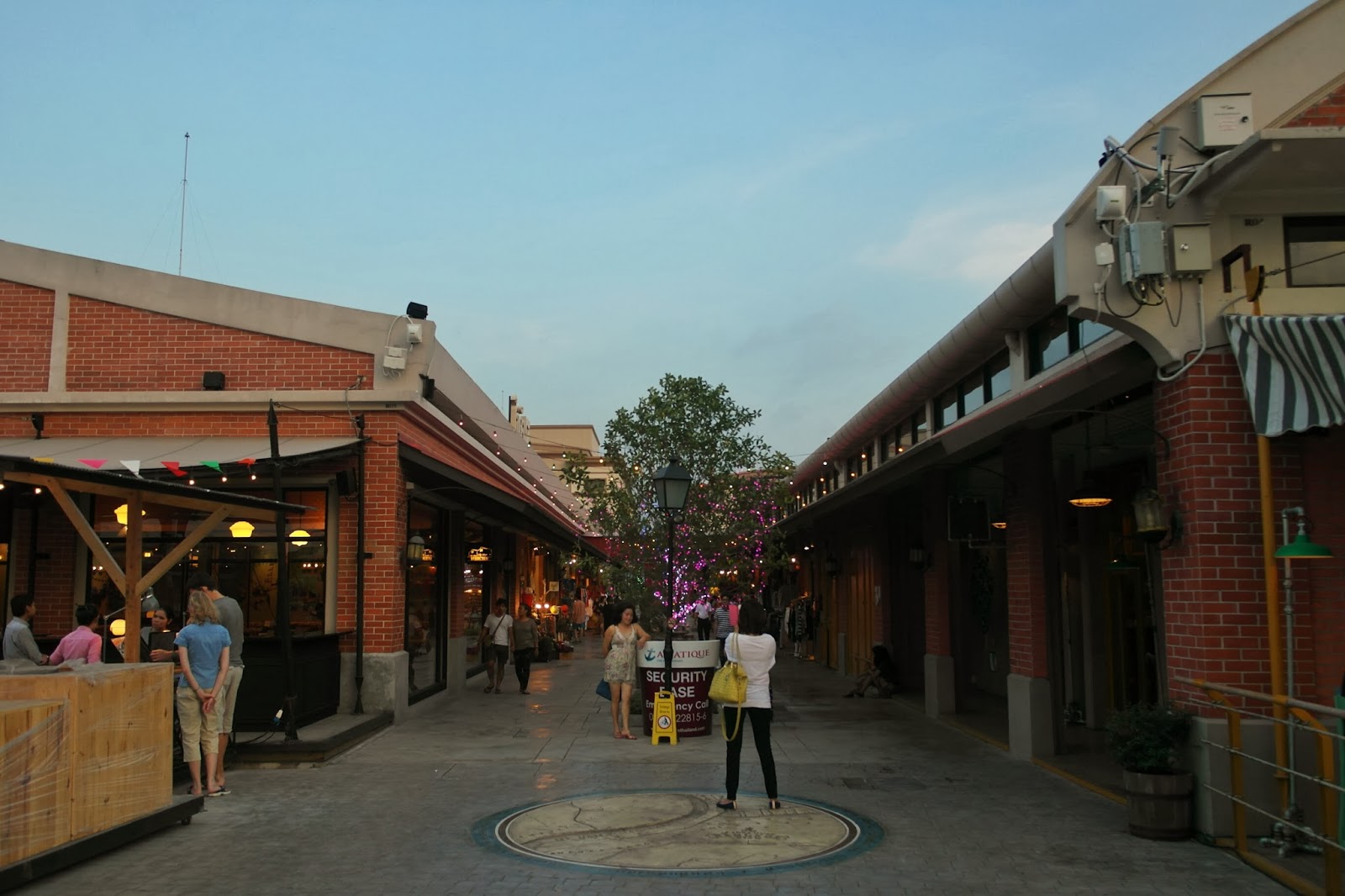 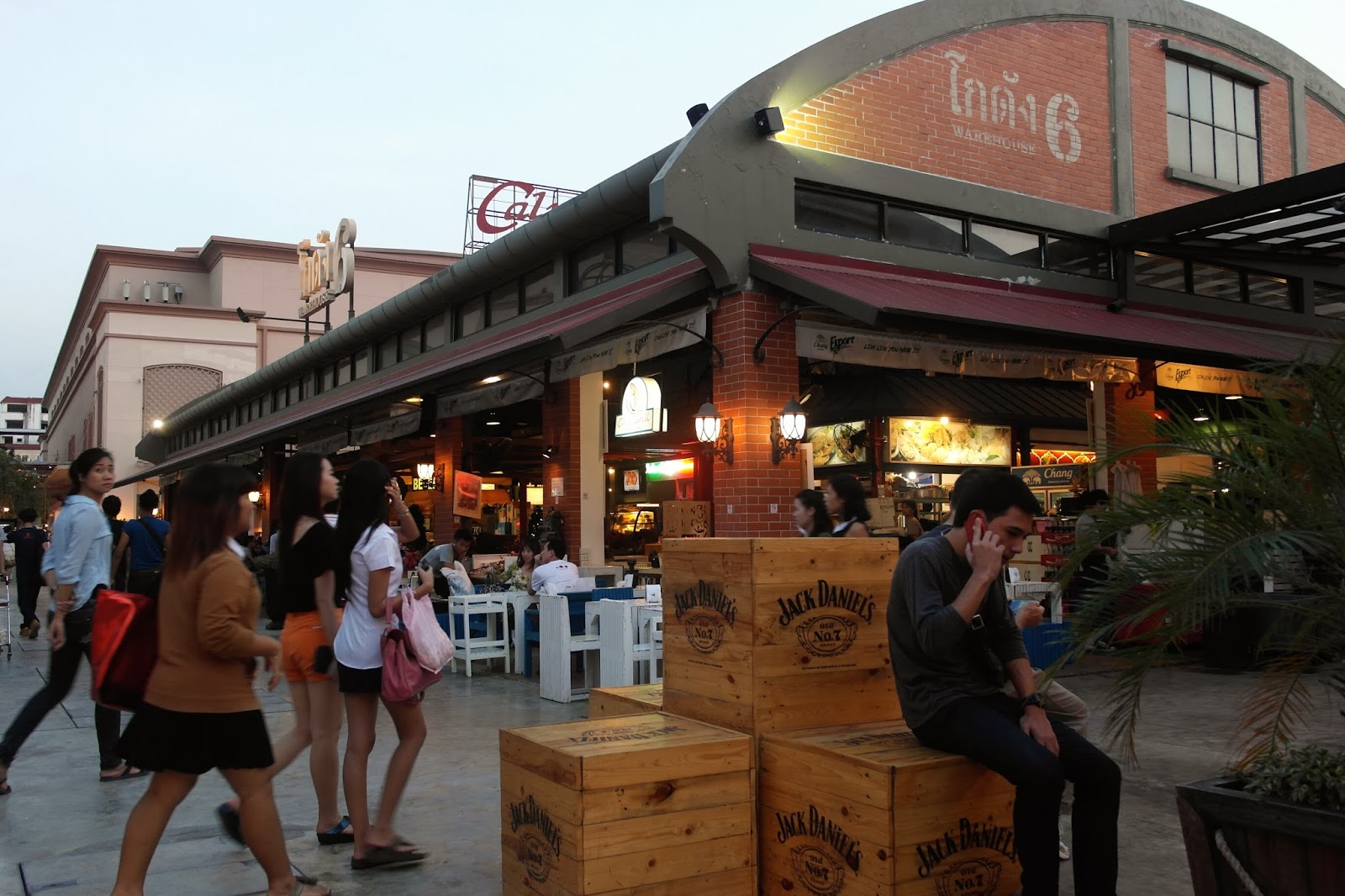 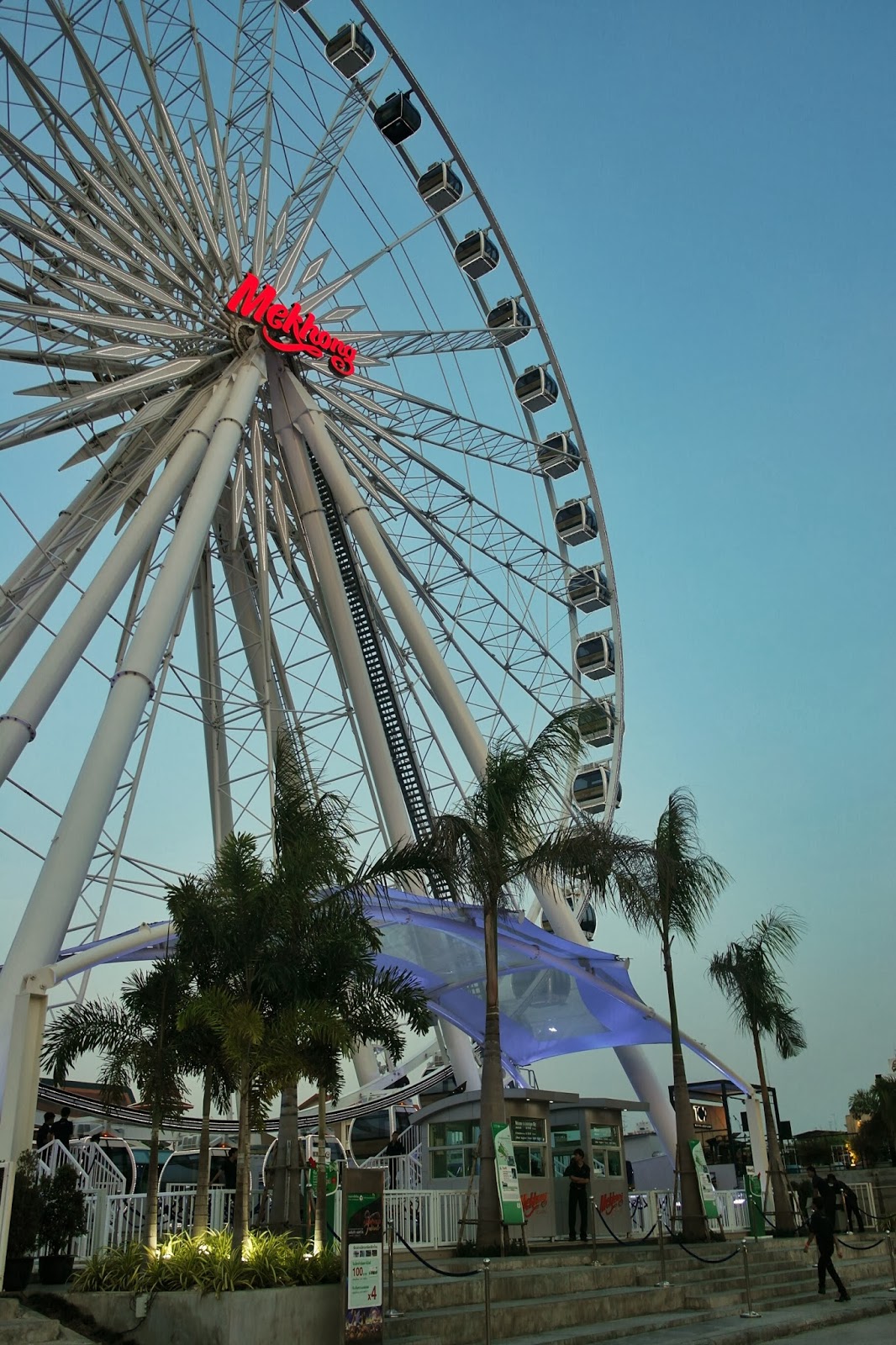 The Asiatique Sky ferris wheel. Priced at 250 bahts for adults.
Located near the bank of the river, it offers a better and more amazing view of Bangkok when you ride this 60 metres high ferris wheel. 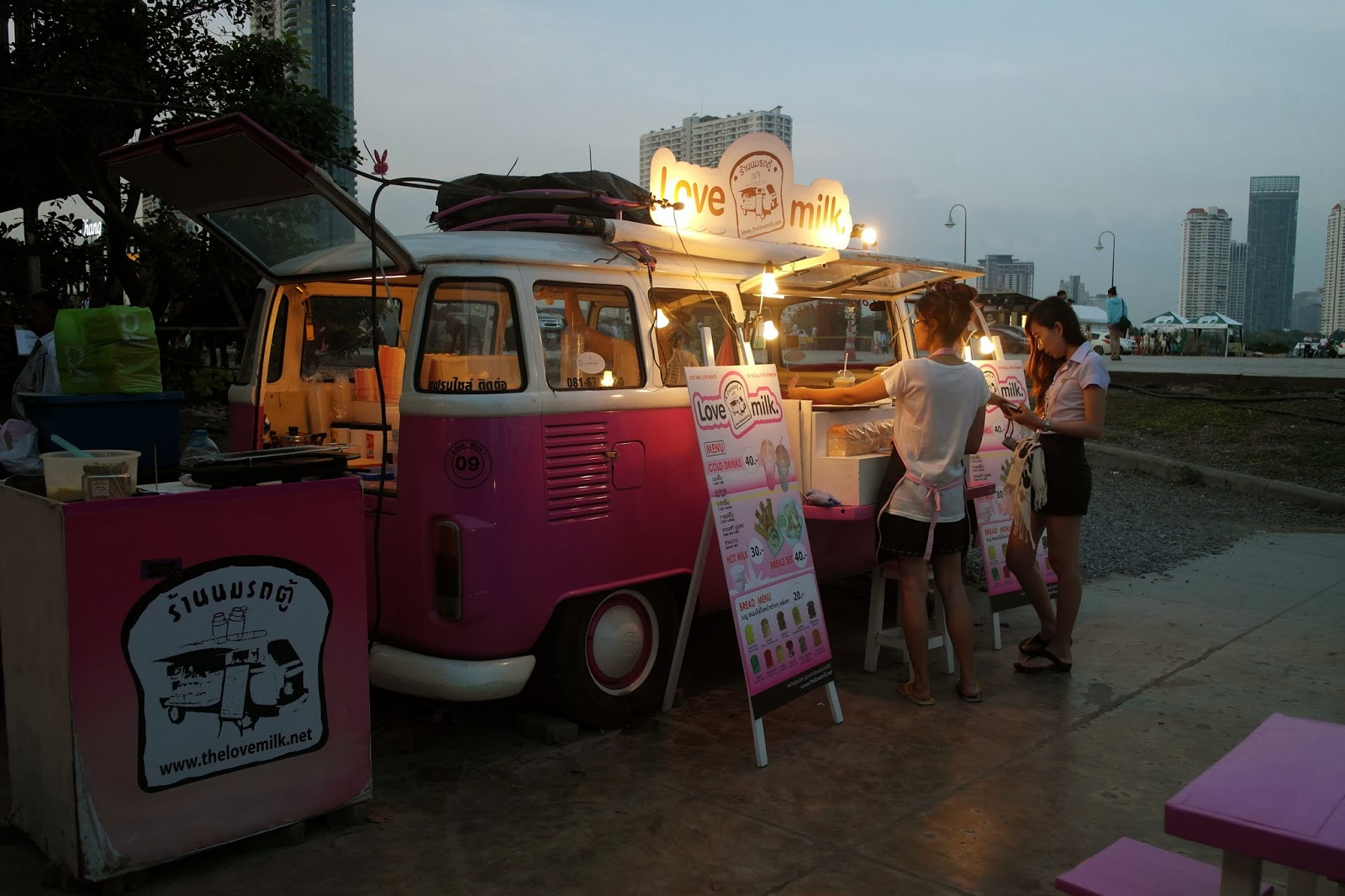 Omg kombi food stall! I kinda like this concept! 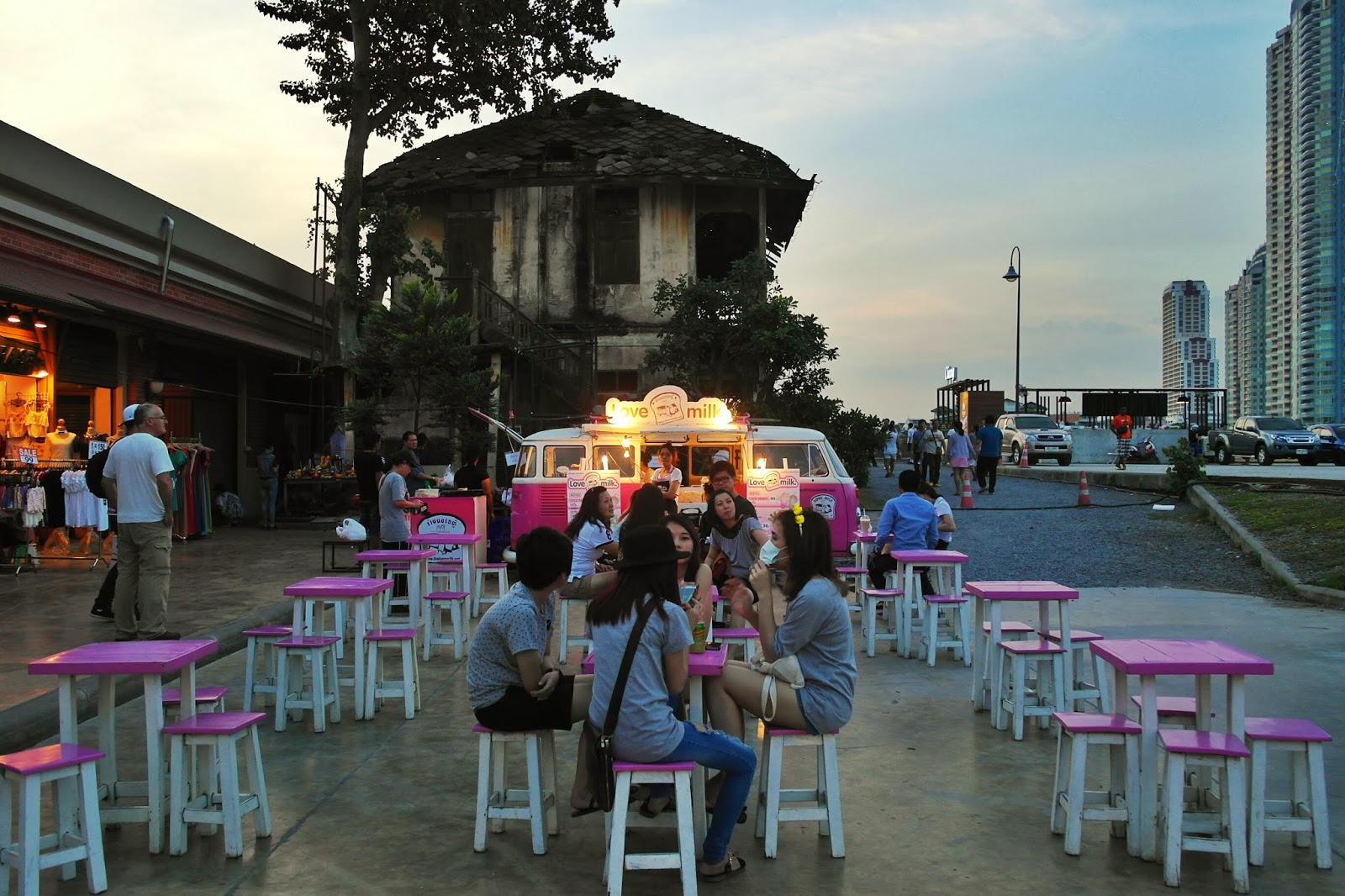 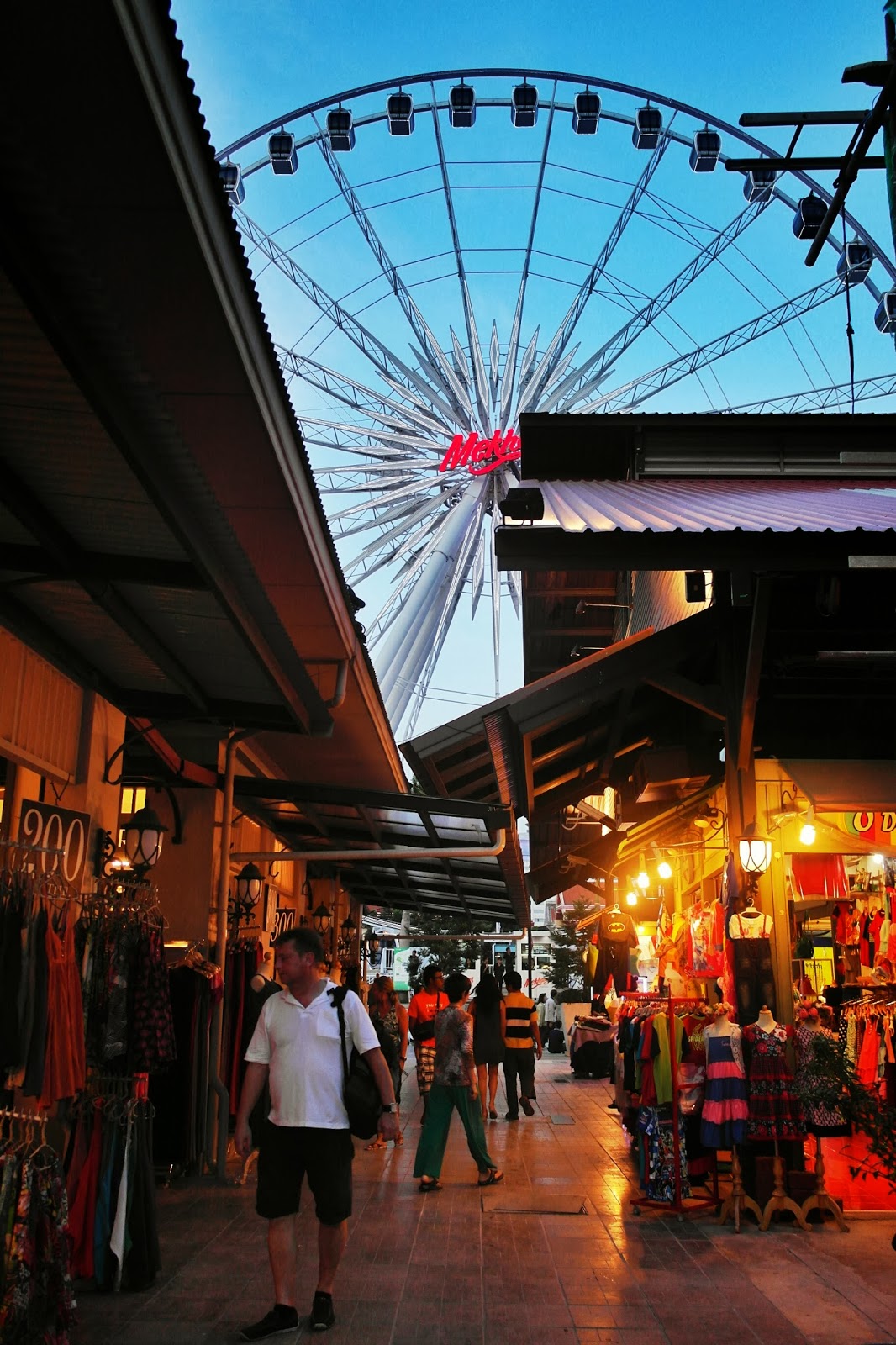 As it is the most upscale night market now, the prices are slightly more expensive than other night markets. Taking in account of strolling on the city’s longest public boardwalk, enjoying panoramic night view, shopping under formally international trade center in Bangkok and dining in whole stretch of fine dining restaurants and bars along the river, we pretty much expect these kind of prices. 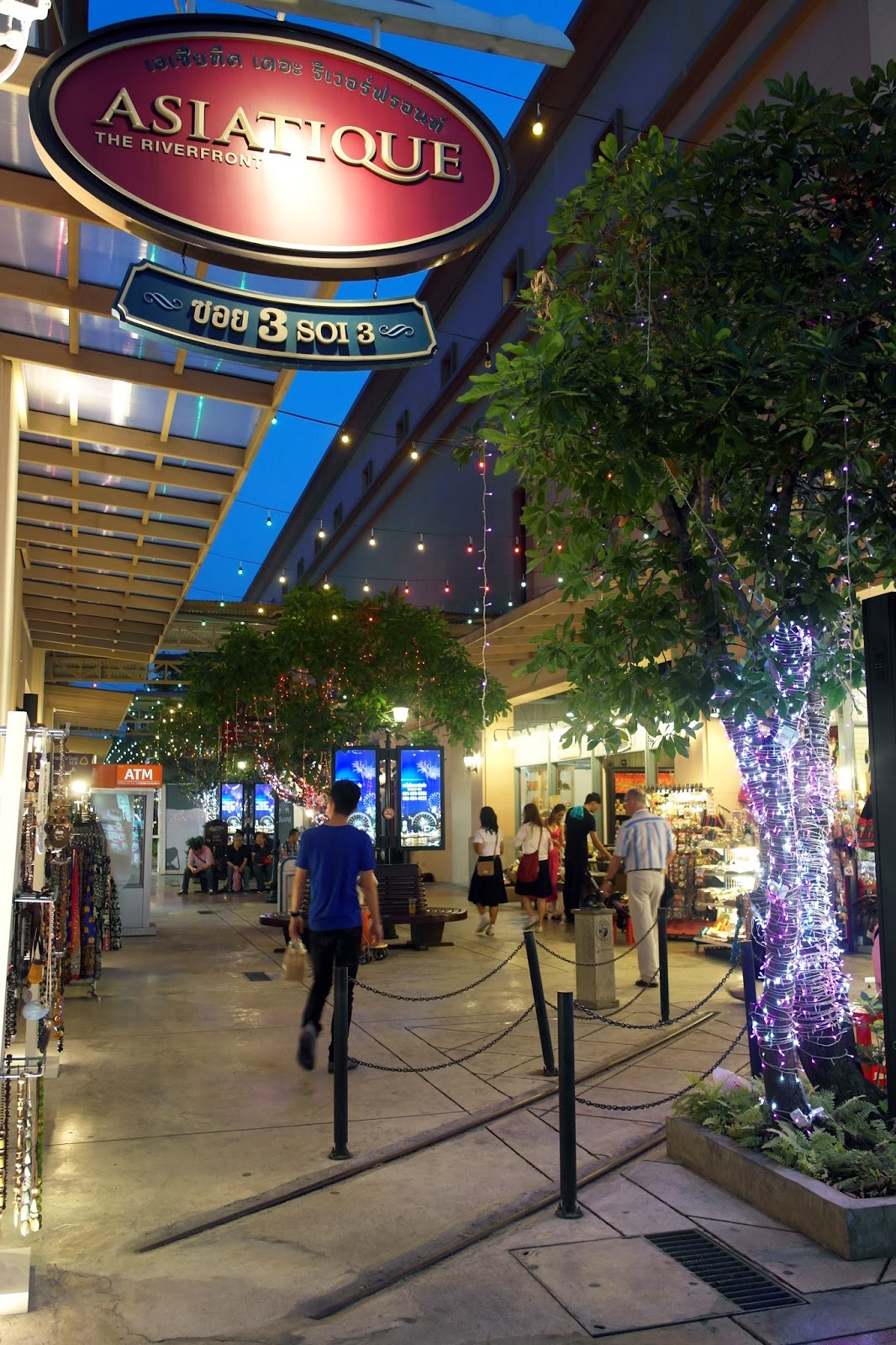 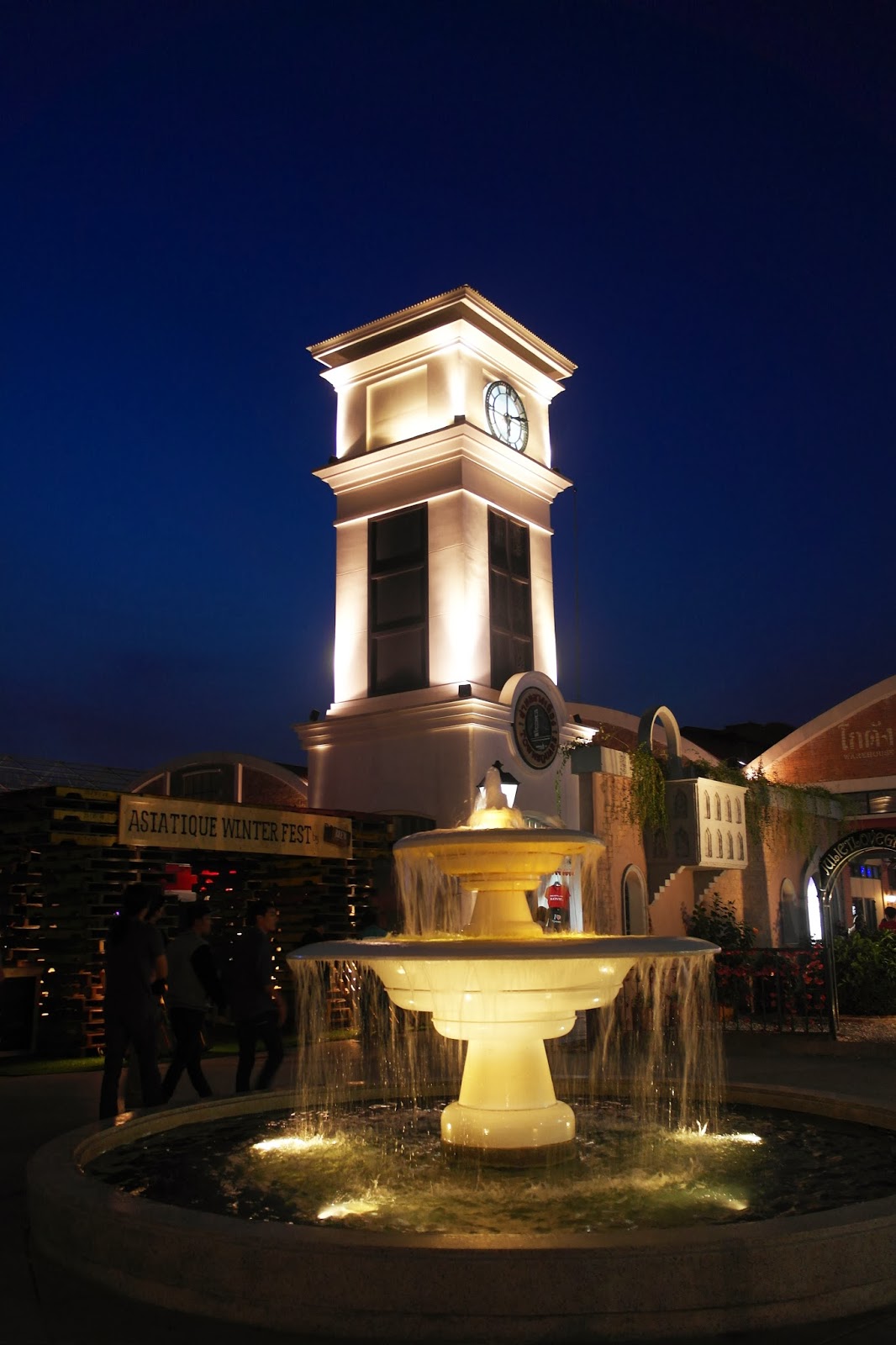 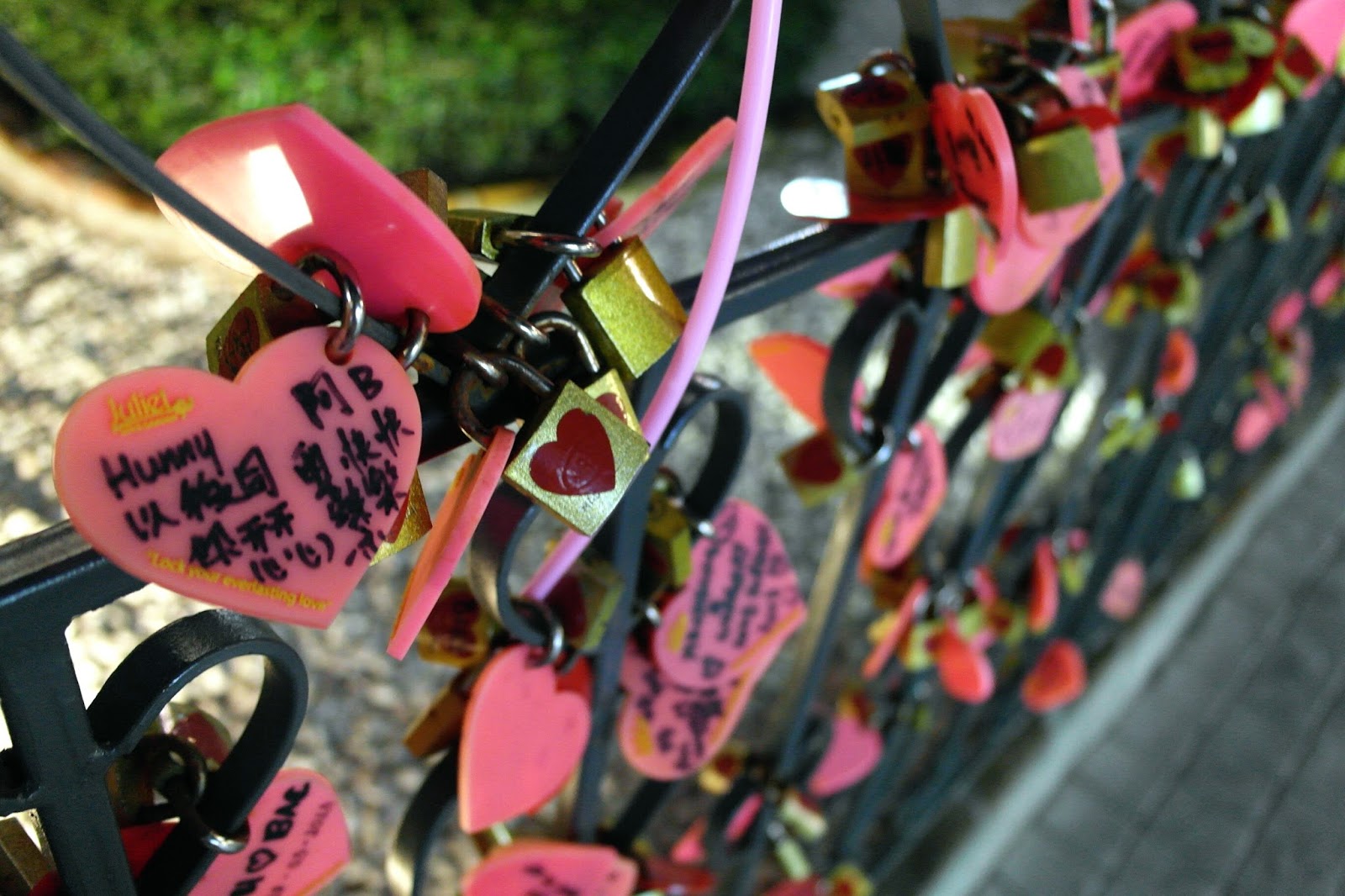 I guess this love lock thingy is kinda hot in many countries.. Paris… Korea and now even Bangkok. Maybe soon in Singapore lol 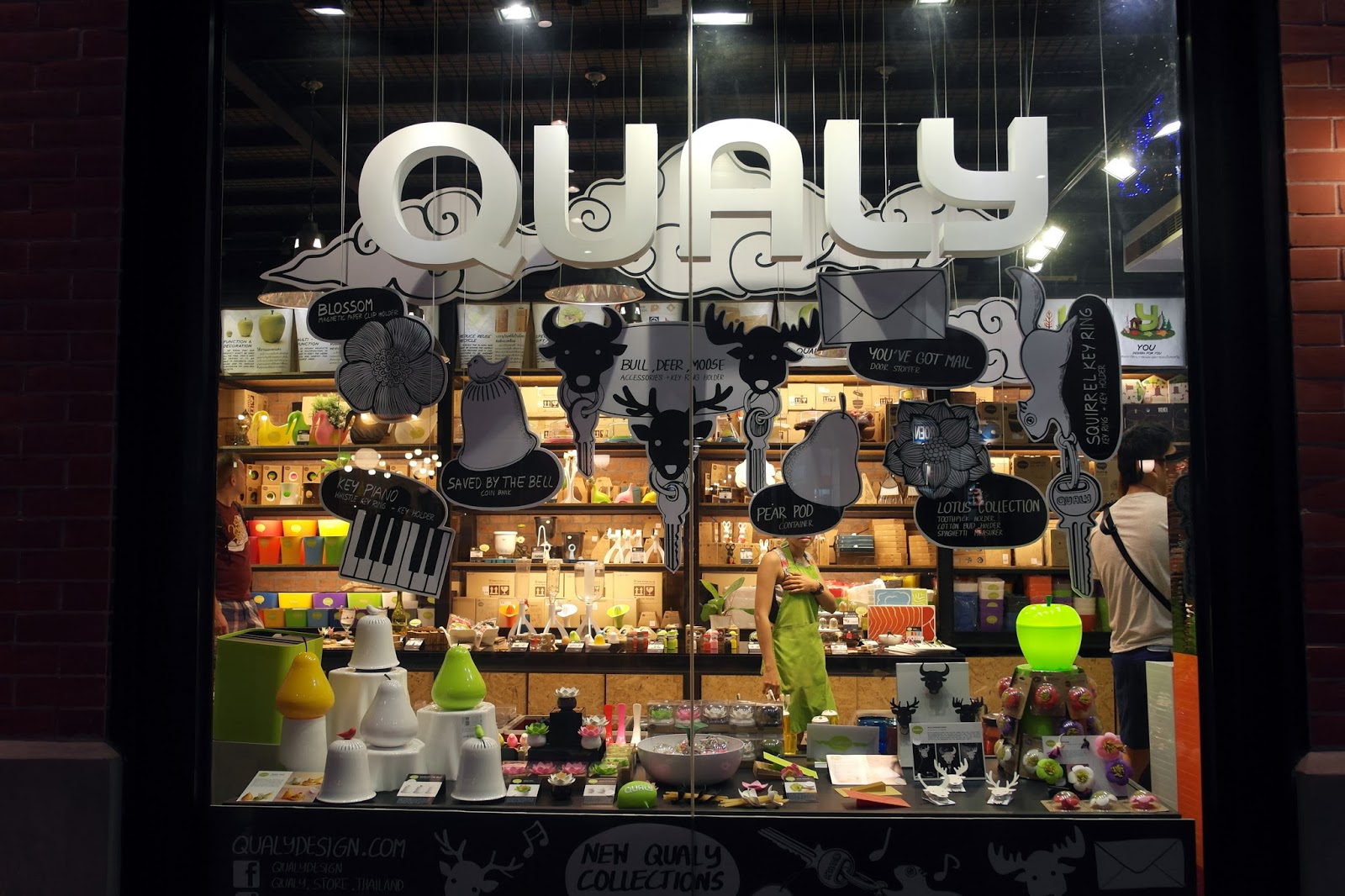 One of their local brands 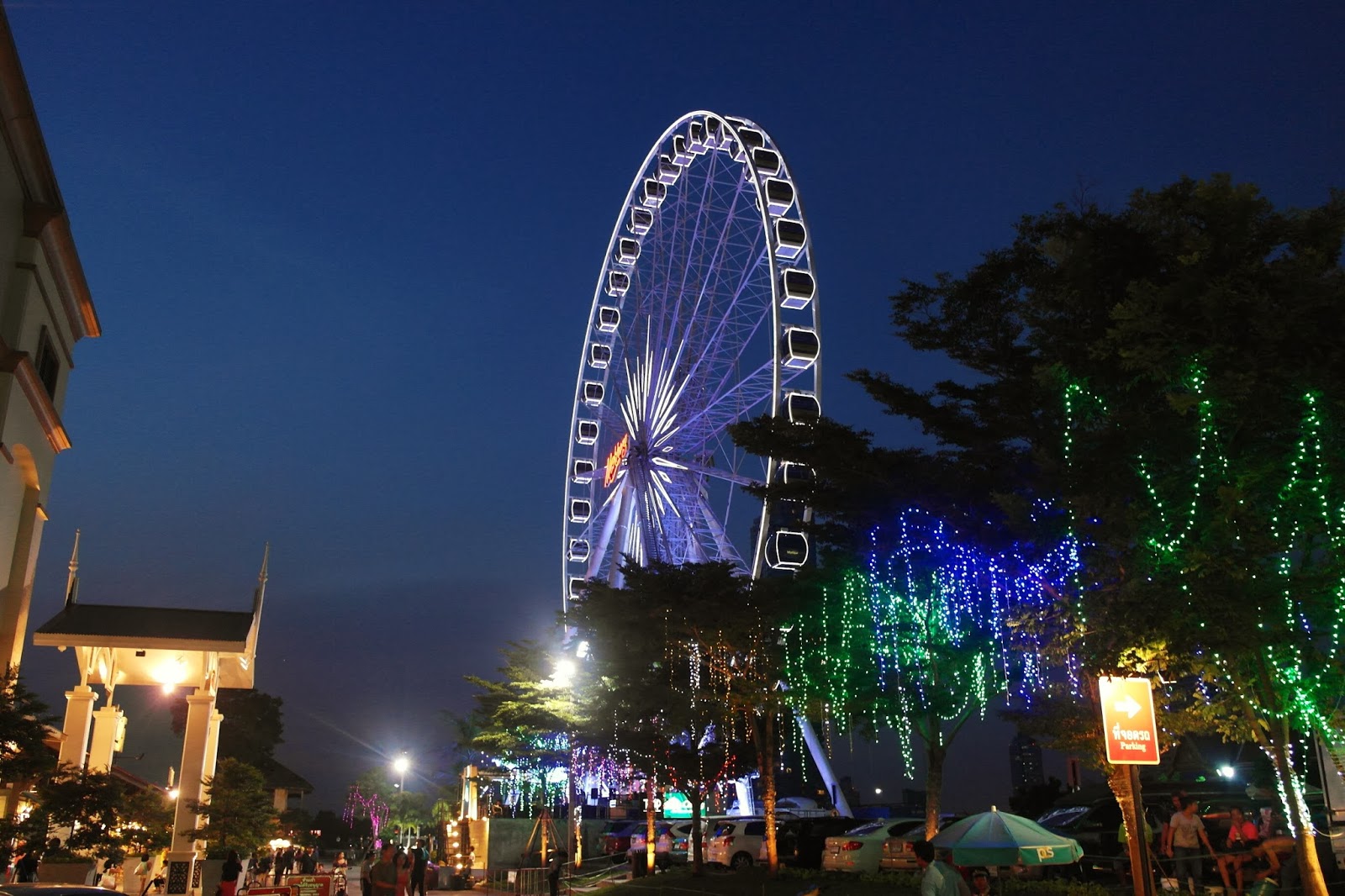 It was near one month away from Christmas season.. 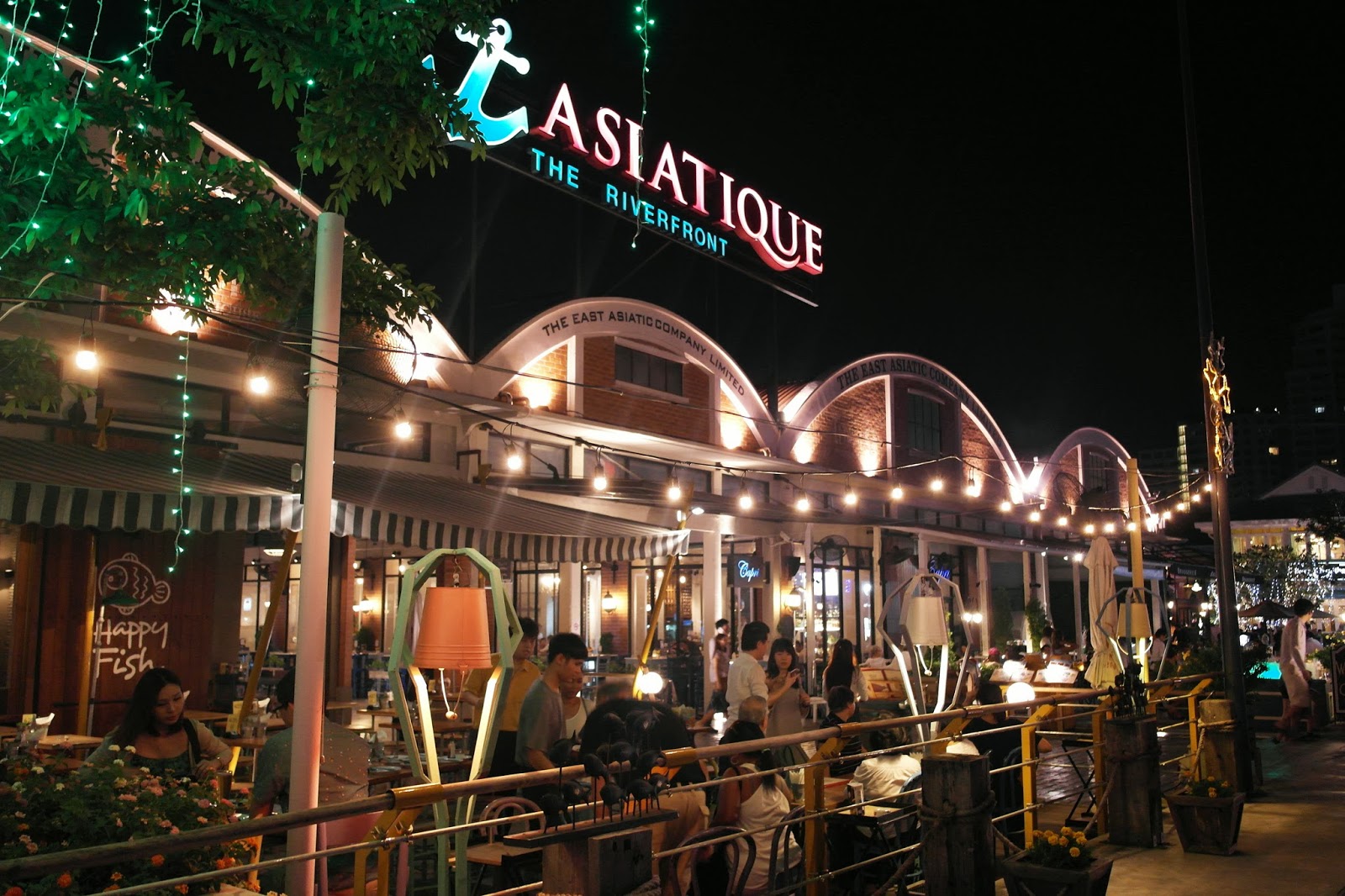 Walking along Waterfront district to look for best dinner spot.. 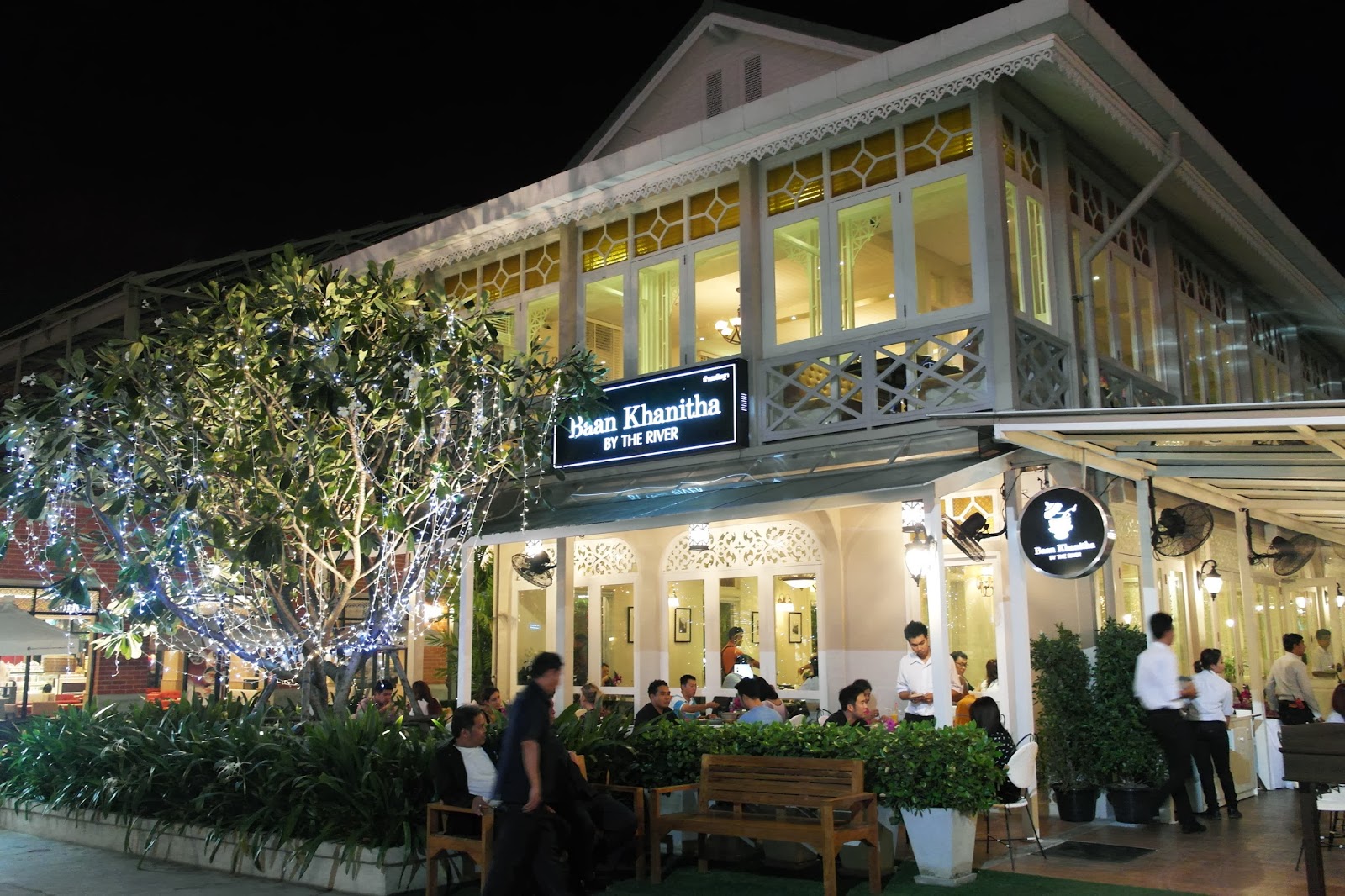 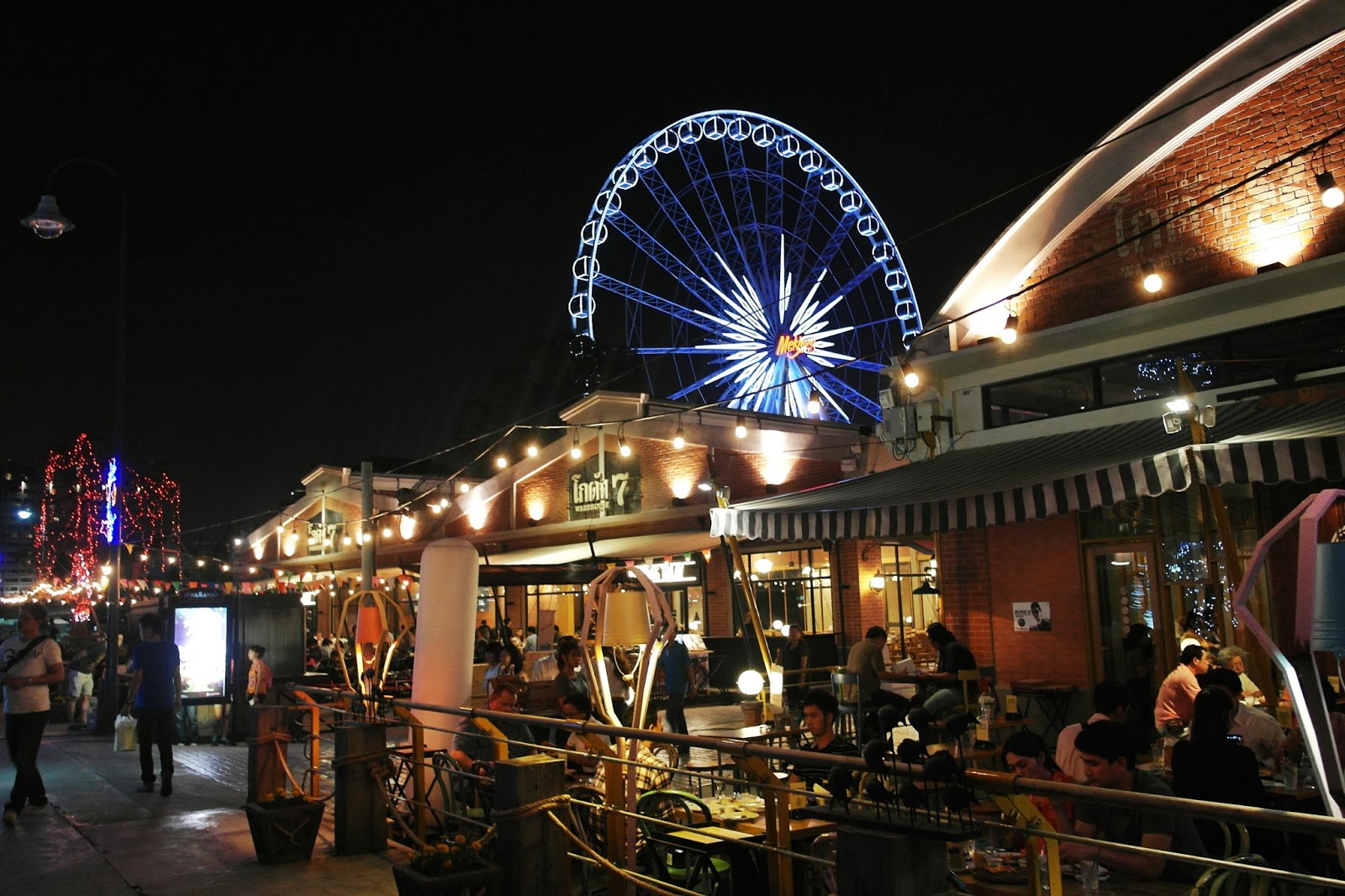 Finally, we settled down in Capri restaurant. Actually every restaurant looked the same, all were serving western food and all by the river so the views were good. We chose this restaurant because we liked the name and there is a Capri Hotel near my office.. okay… not related and let’s move on lol 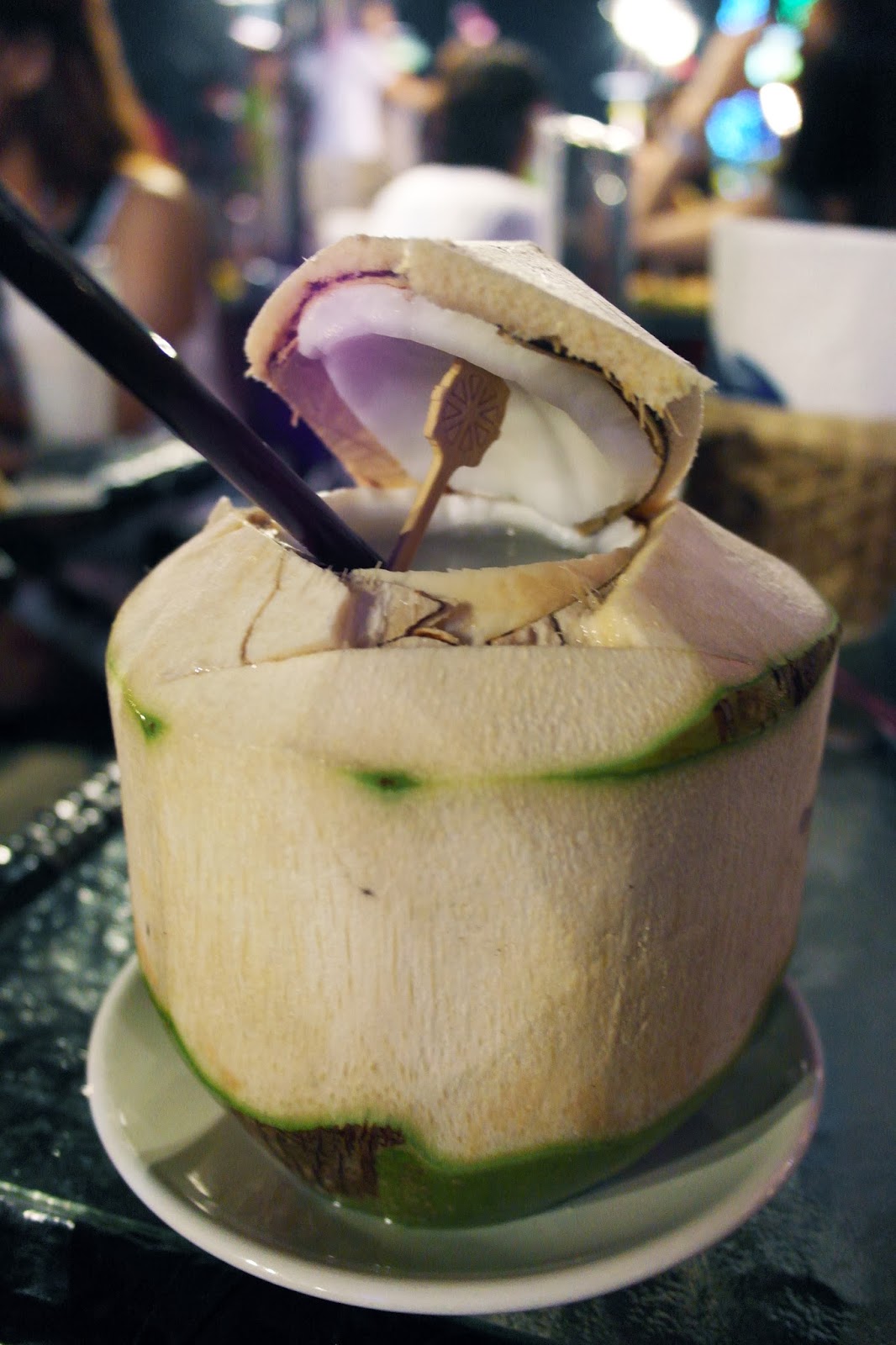 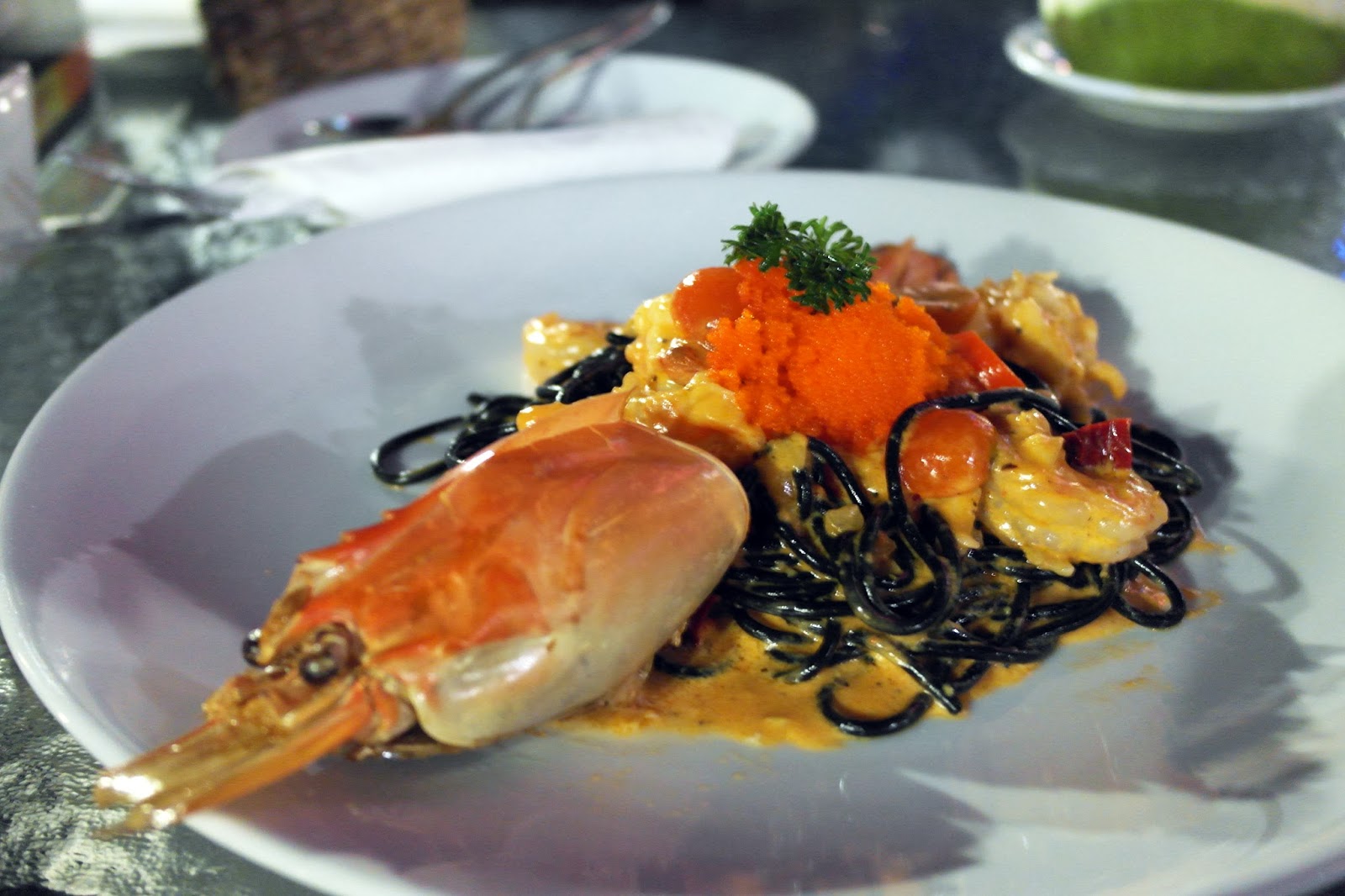 I was browsing the menu and I saw this lobster-black-spaghetti thingy on the menu. I thought to myself that I should try something different and new in other country so I decided to venture this spaghetti. When the food came, I was taken aback by how they present their food. I mean LOOK! There is a lobster head there lol ok this is just bimbotic comment.
HEY, it not only look nice and tasted very nice also! Good job Capri!
It was quite expensive dinner there but with live music, chilling by the river and classy menu probably the standard prices there. 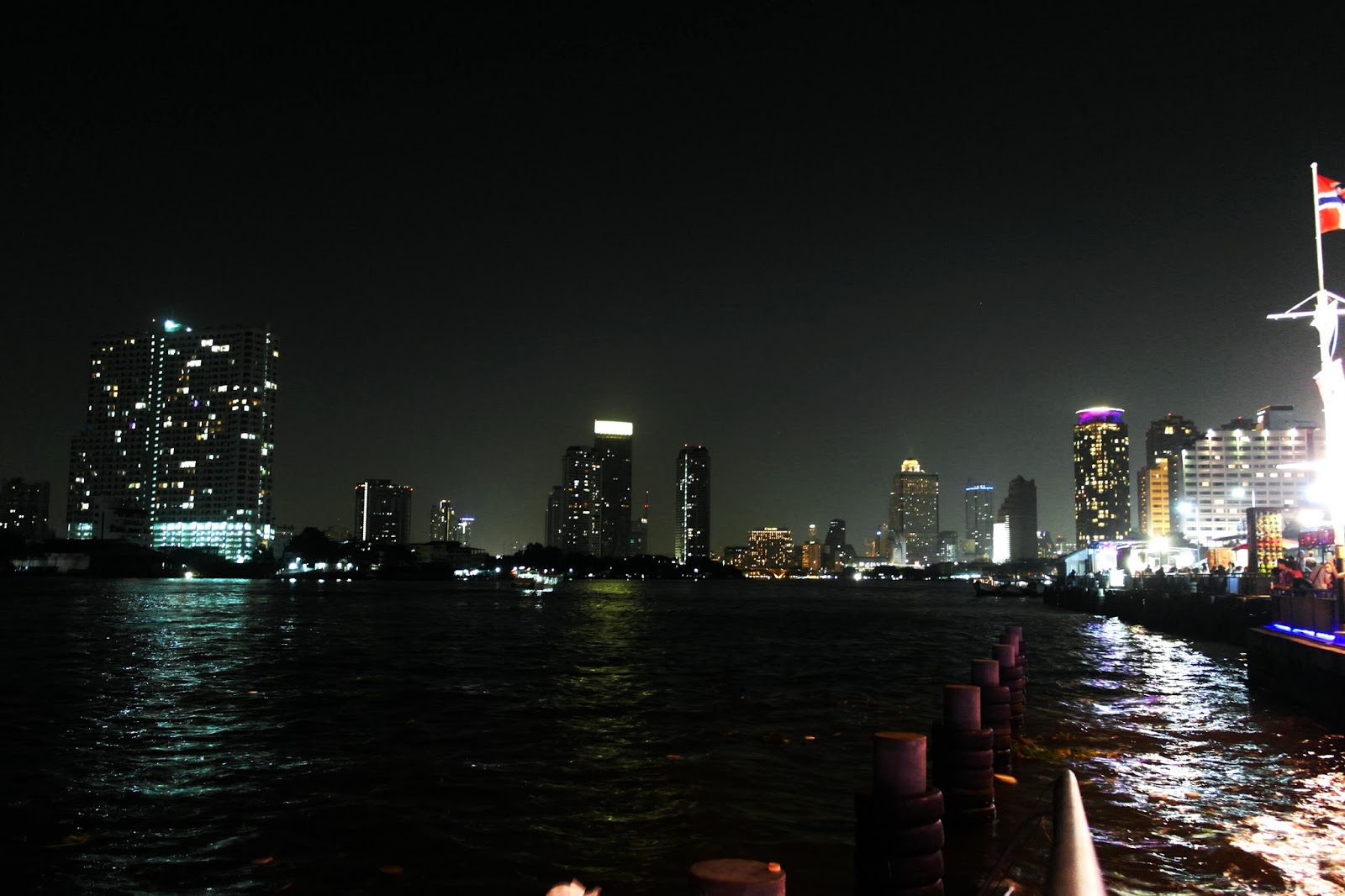 “CBD” view at the opposite side of the river… Okay lah.. not very nice view.. Singapore nicer…
Then we took a cab back to our hotel (which was next to platinum mall). The cab fare was only around 250baht lor! Feel more and more cheated by the dumbass sampan…
Asiatique The Riverfront
Address: 2194 Charoenkrung Road, Wat Prayakrai District, Bangkor Laem, Bangkok 10120
Open daily from 5pm till 12midnight
Web: http://www.thaiasiatique.com/index.php/en
Nearest BTS station: Saphan Taksin station
Tags: andasiatiquebangkokeverydayimtravellingthailandthethis